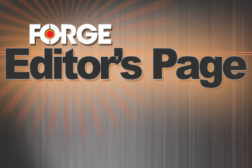 Dean M. Peters
No Comments
In my last column we had a look at the U.S. manufacturing sector with respect to its shrinking share of GDP and its declining share of the overall economy
Read More

Manufacturing by the Numbers

Dean M. Peters
No Comments
For three decades now I have been observing and writing about manufacturing processes and what manufacturing means to an economy. For one such as me, watching what has happened to manufacturing in this country during the past 30 years has been a painful experience.
Read More

Dean M. Peters
One Comment
I must say that I am amazed at the progress of some technologies I have witnessed during my lifetime.
Read More

Dean M. Peters
No Comments
Would you take a job in the public sector that offered the following for an entry-level employee?
Read More

Dean M. Peters
No Comments
Those of us who work in the print media are often asked our opinions about the future of magazine publishing. This is a fair and compelling question.
Read More

Dean M. Peters
No Comments
In my 20-plus years of experience covering assorted metalworking industries, I have observed countless petroleum pricing cycles as they waxed and waned their way through the domestic economy. Along with these cycles, politicians would discuss how important alternative-energy technologies and infrastructure were to America’s future.
Read More

Economic Revitalization Will Begin on Main Street, Not Wall Street

Dean M. Peters
No Comments
Huge industrial giants like General Electric, General Motors, DuPont, Boeing and other companies are often viewed, both domestically and abroad, as the drivers of American business. And yet, both statistically and culturally, it is known that small businesses are the heart and backbone of the American economy.
Read More

Dean M. Peters
No Comments
To readers of this column, what follows may be a little like preaching to the choir. However, the continuing foreign trade deficits being registered by the U.S. are of ongoing concern and bear repeated scrutiny until (or if ever) they are reversed or brought to moderation.
Read More

On the Road Again?

Dean M. Peters
No Comments
More than a year ago, this column concerned itself with the U.S. government’s bailout of two of the big three U.S. automobile companies. Most of us will recall that the government fronted $85 billion of taxpayer money to keep GM and Chrysler afloat as the automakers reorganized themselves through bankruptcy. Writing that column gave me pause for a sad and poignant retrospection because I was part of a generation that “grew up thinking GM would never need protection from anything,” much less looming creditors and financial insolvency.
Read More
Previous 1 2 3 4 5 6 7 8 Next
Subscribe For Free!
More Videos