In a typical multi-burner furnace with numerous temperature measurement points, the change in a single burner’s firing rate can alter the thermal profile inside the furnace in a nonlinear fashion. Consequently, each independent tuning adjustment has cascading downstream effects on the rest of the system. The new CertiFire® temperature mapping algorithm described here offers the ability to auto-mate the thermal tuning process.

Forging and heat-treating furnaces require precise combustion-system tuning to produce high-end parts for the aerospace, automotive and construction industries. Temperature uniformity surveys are the accepted industry standard for verifying quality on these metal-processing furnaces. Current standards in place specify a certain temperature uniformity that must be maintained inside the furnace work zone. End users like Boeing, GE and Pratt & Whitney have set these quality standards, which have trickled down to suppliers, furnace manufacturers and combustion-system technologies for uniformity compliance.

Today’s furnace and combustion-system tuning methods are slow, inefficient and outdated. These methods require skilled technicians to make precise, manual adjustments to single components in an iterative fashion. Adjustments require this recursive approach because the system of equations governing an industrial furnace’s heat distribution is nonlinear.

In the typical case of a multi-burner furnace with more than one temperature measurement point, the temperature distribution across a measurement array is not directly proportional to the change in a single burner’s firing rate. Due to the system’s nonlinearity, each independent tuning adjustment has incidental, cascading downstream effects on the rest of the system. Every attempt to resolve temperature disparity in one area of the furnace can consequently bring another area out of compliance.

Reinvention of the Tuning Process

Fives North American Combustion (FivesNA) has developed a solution that improves the temperature uniformity tuning process, both in speed and accuracy. The North American CertiFire® technique implements a patented[1] temperature mapping algorithm that creates a linear approximation of any furnace’s system of equations, regardless of its geometry or complexity. Once linearized, the temperature distribution can be resolved through simultaneous adjustments.

The temperature mapping algorithm creates a response matrix that correlates changes to the furnace’s heat inputs with changes in the steady-state distribution of heat throughout the furnace’s work zone. In practice, a thermocouple array can be used to measure the work zone’s three-dimensional temperature distribution while the furnace’s burners are modulated. It is critical to the accuracy of this response matrix that the burner modulations are precise and repeatable. To accomplish this, we utilize a valve that bleeds air pressure from each burner’s cross-connected regulator’s air impulse line to atmosphere (Fig. 1). 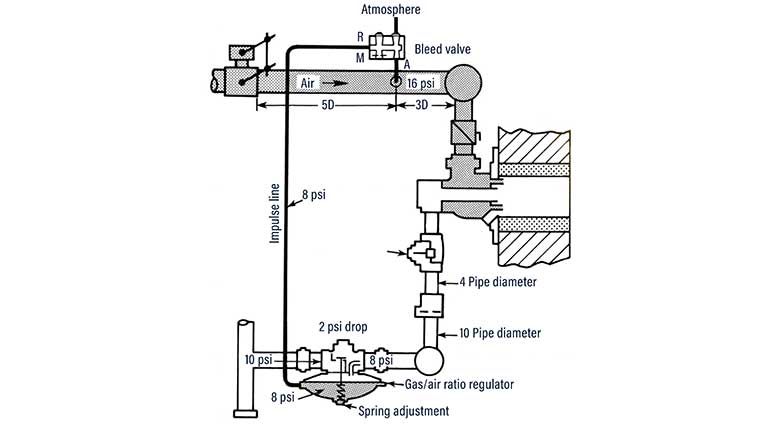 By opening this valve and allowing air to flow to atmosphere, the static air pressure in the regulator is lowered, which reduces the fuel flow through the regulator’s orifice. With a high-quality regulator, the fuel flow and thus the heat output of the burner is linearly linked to the stroke of the bleed valve. Each individual burner modulation has its own characteristic effect on the entire work zone’s temperature distribution. This effect is dependent on many factors, including the adjustment amount, the number of burners, the size of the work zone, the overall furnace geometry and the average work-zone temperature. 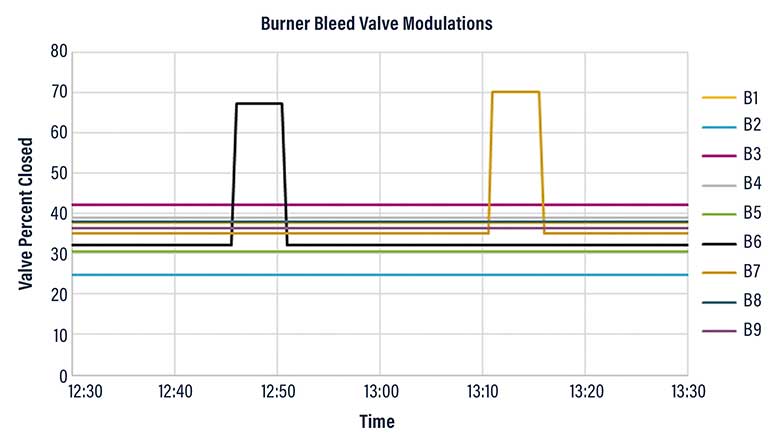 Figure 2 shows two different burner modulations, and Figure 3 shows the resulting furnace temperature distribution over the same period. Nine thermocouples were placed in accordance with the AMS 2750 standard for the furnace volume and class, with eight thermocouples at each of the cubic work zone’s vertices and one in its center.[3] 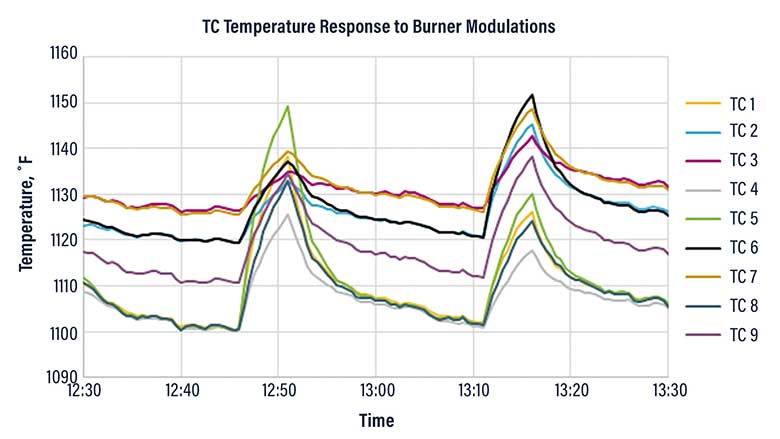 The firing rate of each burner was increased a fixed amount for a set number of minutes. The second burner was not adjusted until the work zone’s bulk temperature returned to the baseline average temperature. The two burners noted in Figure 2 were firing in the same plane several feet from one an-other. Despite the burners’ proximity and similar adjustments, their effects on the temperature distribution shown in Figure 3 are uniquely different. Not only does the overall rate of temperature change differ between the curves, so does the individual thermocouple reactions. Thermocouple 5 (shown in green), for example, shows the largest change in temperature for the first burner’s modulation, but it experiences a much weaker response during the second burner’s modulation. 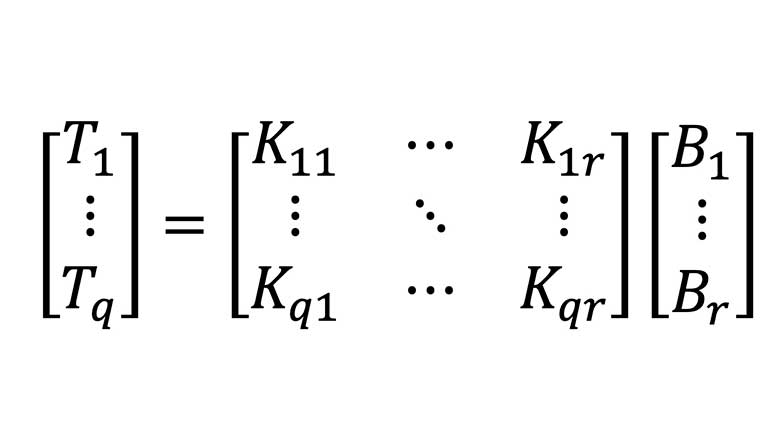 The linear approximation of the furnace’s system of equations can be written as shown in Figure 4, where the vector T represents the temperatures of q thermocouples, the vector B represents the bleed-valve modulations of r burners, and the response matrix K represents their relationship. By compiling each of these burner modulations and their resulting temperature effects, the furnace’s unique response matrix can be calculated as shown in Figure 5. 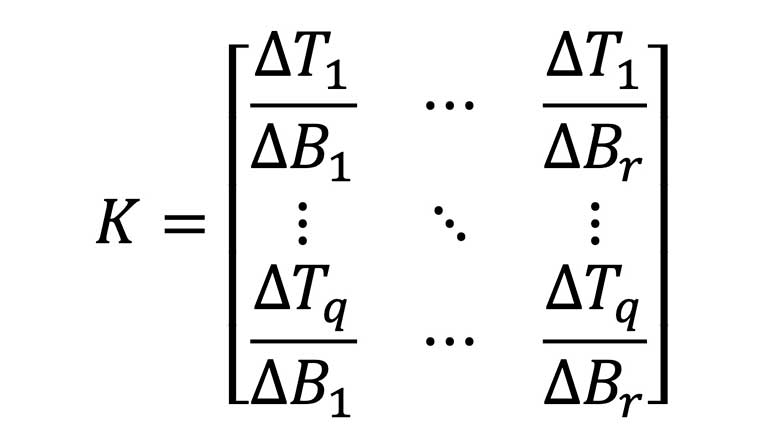 In a steady-state furnace, starting with a vector ΔT representing the required changes in temperature for each thermocouple to reach the survey temperature, this equation can solve for ΔB, which is the necessary burner bleed-valve adjustments to achieve temperature uniformity.

This temperature mapping process will typically take several hours. It is dependent on the number of burners and the necessary tuning accuracy, which is often set by the furnace certification class. 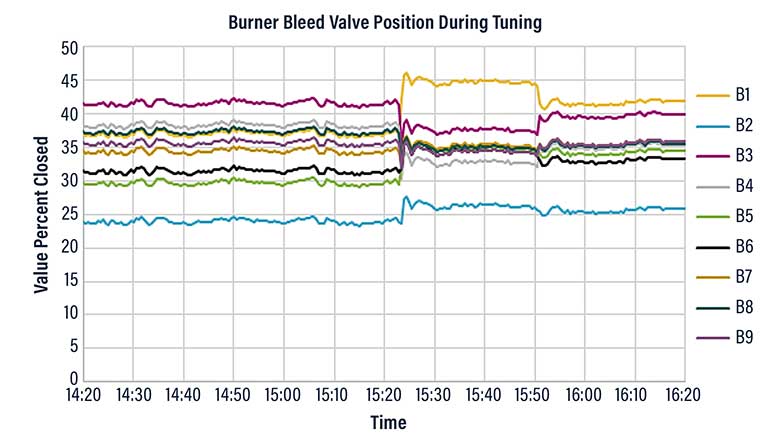 The furnace used in testing was a nine-burner box furnace with a work-zone volume around 200 ft3 (5.7 m3). A response matrix was created for this test furnace in 3.5 hours at a survey temperature of 1100°F (593°C). Using this response matrix, burner adjustments were solved and implemented. Figure 6 shows the burner bleed-valve positions before, during and after the adjustments were made. Figure 7 shows the resulting thermocouple temperatures over this same period. 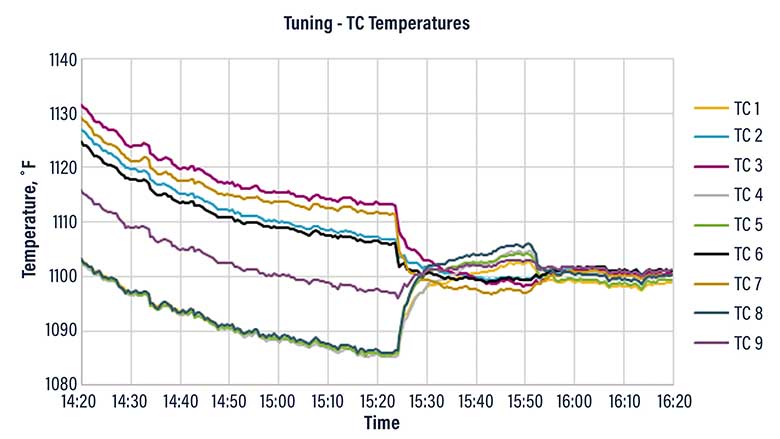 This test furnace was made ready for AMS 2750, Class 1 certification in less than one hour of tuning. Including an additional hour of settling time between the conclusion of the mapping process and the start of the tuning process, this test furnace required a total 5.5 hours to reduce the temperature dis-parity from a span of 28°F to 3°F. The only human interaction required in these 5.5 hours was a manual click of the “start tuning” button. 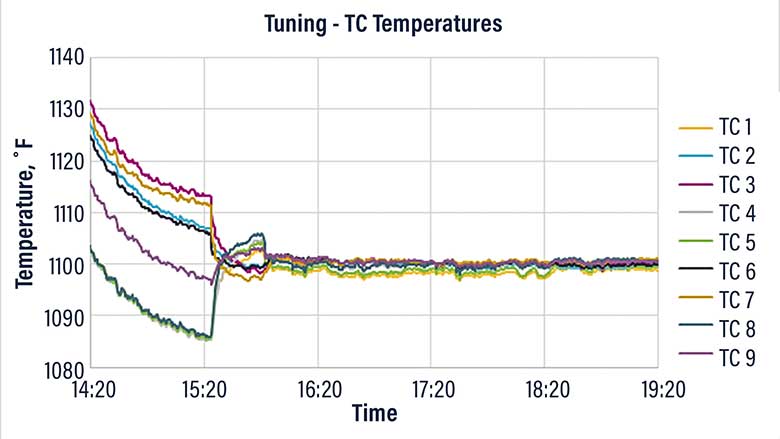 Changing the Future of On-site Pyrometry

Combustion-system tuning can consume immense resources, including staffing, scheduled downtime, burner maintenance and certification equipment calibration. Using this new temperature mapping algorithm,  the uniformity tuning process can be automated. Most industrial furnaces – regardless of their size, complexity or geometry – can be tuned faster and to a narrower temperature span without the need for manual intervention.

The mapping algorithm also provides the ability to predict future maintenance needs. Historical temperature maps can be used to identify furnace degradation or combustion-system drift, and changes in a furnace’s response matrix can pinpoint where deterioration has occurred. This type of predictive maintenance allows end users to be proactive on any temperature uniformity tuning or furnace repair that is needed.

For more information: Ben Witoff is a data engineering manager for Fives North American Combustion Inc. in Cleveland, Ohio. He can be reached at 216-271-6000 or benjamin.witoff@fivesgroup.com. Visit www.fivesgroup.com for addition information.

Report on the Global Supply Chain