For three days in late October, Motown played host to 1,300 attendees and 129 exhibitors at Forge Fair 2021. It was not the largest show ever, but – after having been cancelled twice in 2020 – the enthusiasm by the show’s attendees in doing business person-to-person again was unbounded. The next Forge Fair will take place in Cleveland, Ohio, May 23-25, 2023.

Detroit was jumping for a few days in late October as FIA sponsored its Forge Fair 2021 exhibition and technical program at the city’s famed TCF center. About 1,300 people attended the event, which opened its show floor at 11:00 a.m. on Tuesday, October 26. 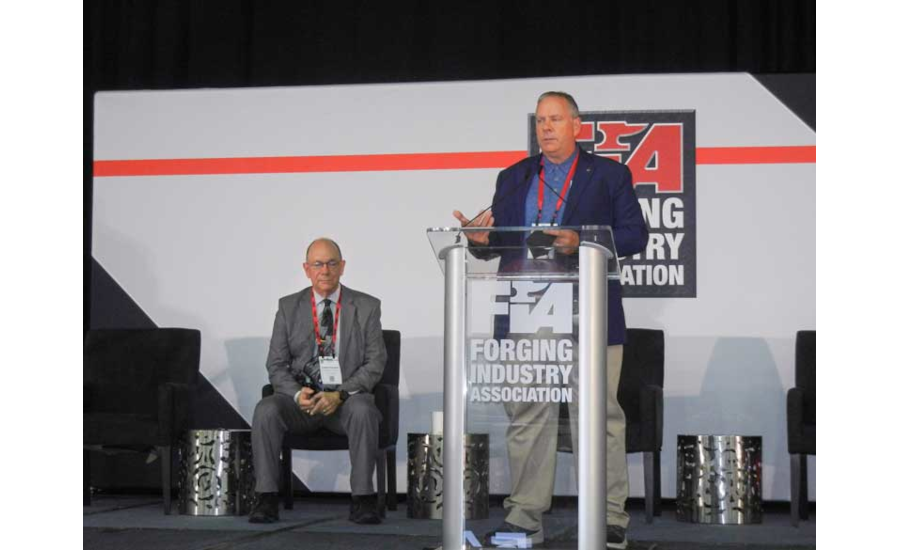 FIA President James R. Warren introduces keynote speaker Chris Kuehl.Forge Fair 2021 may not have been the largest event of its kind. It may not have attracted the highest number of attendees or exhibitors. For an event that was cancelled twice in 2020 and finally held a year later, however, the enthusiasm of those present was unsurpassed.

After 18 months of the COVID economy, attendees to the three-day event were universally in agreement that it was nice to be doing business as normal again. That said, Forge Fair is still North America’s largest forging event, and the FIA staff deserve accolades for hosting this show in the face of lots of uncertainty.

Among the 1,300 people who attended the event, despite present-day travel difficulties and COVID-related restrictions, were some of the forging industry’s leading executives, technical experts, educators and suppliers. Although 95% of all attendees were from the United States, there were about 5% that came from 13 other countries. These included Canada and Mexico (16 attendees each), Germany (9), Austria (5), the United Kingdom (5), Belgium (2), Switzerland (2) and Taiwan (2). India, Italy, Spain and Turkey each had one attendee.

The show also provided an opportunity to celebrate a couple of anniversaries. Weldaloy hosted their 75th anniversary celebration during the show at an invitation-only event at the Detroit Foundation Ho-tel. Also, FIERF (Forging Foundation) celebrated its 60th anniversary during the reception on Wednesday.

There were 129 exhibitors at this event. As always, the show floor was the main attraction of Forge Fair 2021. The exhibit aisles offered an assortment of equipment manufacturers, steel suppliers, tool and die companies, software developers, chemical companies and others. The show floor was open during all hours of the show, including during the technical program, which was held on a separate lev-el of the building.

The exhibit-floor podium got busy on October 27 when economist Chris Kuehl, managing director of Armada Corporate Intelligence, gave an interesting talk on the national and global economies and his outlook for them into 2022. On Thursday morning, Ashleigh Walters of Onex Inc., moderated an all-female panel of industry leaders who had an open discussion about women in forging. The show floor also hosted Career Day.

Two breakfasts, two lunches and two cocktail hours were hosted on the exhibit floor, allowing attendees and exhibitors to mix and meet socially during the three-day event. 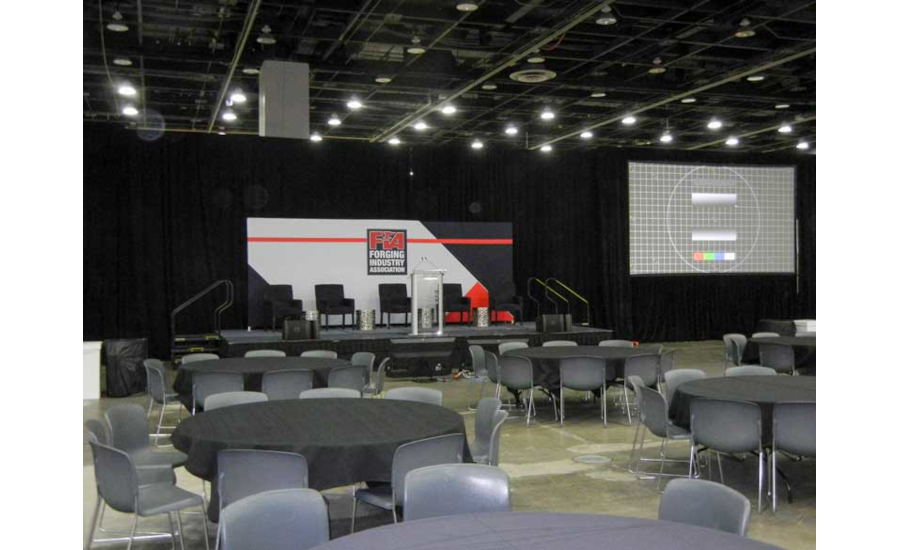 Meals were served in the presentation area on the show floor.

Chris Kuehl, managing director of Armada Corporate Intelligence, delivered his keynote economic ad-dress to Forge Fair attendees during a breakfast session in the main exhibit hall. His talk was titled “2022 Economy: Old Issues Hang on While New Ones Emerge.”

The talk was very informative and began with an overview of the post-pandemic economy, recognizing that the pandemic is not yet history. The domestic economy in 2021 is seeing a high rate of growth. This stems from consumers who were given stimulus money during the pandemic but had no place to spend it since many services, such as restaurants, recreational and business travel, entertainment, etc., were shut down. The result was that people bought more goods instead of services, and some put stimulus money into savings. Kuehl offered that the COVID pandemic probably has one more surge left going into 2022 as winter arrives.

Regarding the shortage of labor to fill job openings, Kuehl discussed the “gig economy,” in which people can make money “off the books,” such as a team with chainsaws taking on a neighbor’s tree trimming. Kuehl also predicted that supply-chain issues will continue to deteriorate through the upcoming holiday period. Ports congested with container ships will continue to be clogged, and chip shortages will continue to challenge the market for new cars and light trucks.

Manufacturing delivery times in advanced economies have lengthened at a record pace.

Two-thirds of managers are talking about the reshoring of manufacturing activity. An estimated $1 trillion of reshoring (and near-shoring) activity is scheduled for next year.

Warehousing is a fast-growing sector.

In Europe, a lack of wind to drive wind farms and uncertainty around Russia’s natural gas pipeline have driven oil prices up.

Steel scrap prices have been volatile.

Office-space utilization is not recovering because COVID restrictions have taught people how to use digital face-to-face meeting platforms and how to work from home.

During the general session on the last day of the show, a little bit of history was made when the first panel discussion devoted to Women in Forging was presented. This was a well-orchestrated panel discussion moderated by Ashleigh Walters, president of Onex Inc. Panelists included Paige King, forge engineering manager at American Axle & Manufacturing; Chelsea Lantto, president of Trenton Forging; Danielle Smith, director of marketing administration and inside sales at Finkl Steel; and Suzanne Tkach, owner of Tkach Consulting.

Walters and each panel member made opening statements about their backgrounds, how they came to find themselves in the metal forging industry, and the challenges they had to face and reckoned with to get there. Each also talked about their companies and the importance that mentors, often male, played in their lives.

The discussion covered many issues relating to women and their roles in a male-dominated environment. They ranged from the mundane, such as the availability women’s restroom facilities near the factory floor, to the sublime, such as girls and young women being exposed to STEM educational opportunities in equal measure to their male counterparts. Also discussed were the challenges faced by women in raising families and still maintaining their careers; breaking down the gender barriers in mat-ters of personal and corporate empowerment; being part of a flexible and cross-trained workforce; and numerous others.

More information about Women in Forging, including actively participating companies, can be found at https://www.fierf.org/women-in-forging.

After well over a year of COVID shutdown of the global and domestic economies and two cancellations in 2020, Forge Fair 2021 was long overdue. Attendance was admirable given the circumstances, and the event was efficiently organized. The enthusiasm of attendees was at a record high, and all agreed it was nice to be doing business face-to-face again.

Author Dean M. Peters, also a regular conference and expo attendee, is a metallurgist and has been editor of FORGE since its first issue in 2006. He can be reached at 216-570-4537 or dean@forgemag.com.