Developments in Lubrication Systems for Metal Forming: Part I – Warm and Hot Forging

In the hot and warm forging of steel, there is a clear trend to replace graphite-based die lubricants with synthetic lubricants. This is driven by the need for cleaner work environments, easier handling and to avoid graphite-induced galvanic corrosion of equipment.

In recent decades, several generations of graphite-free products have been developed with the result that even complex parts like crankshafts can, in principle, be forged using graphite-free lubricants. 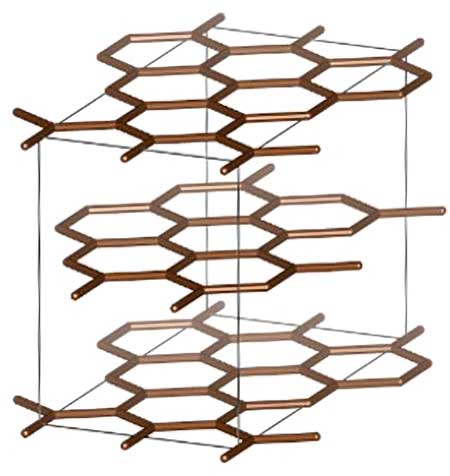 Figure 1. The layered structure of graphite

The current state of the art of die lubricants for hot and warm forging often includes water-based dispersions of graphite. During their application on the hot die surface, the water evaporates and a solid lubricant film consisting of graphite and additives is left behind. Due to its structure – hexagonally shaped planes stacked like a deck of cards – graphite can support the metal-forming process. The low interactive forces between the planes allow the planes to slide over each other with little friction, supporting metal flow in the direction of the planes. Concurrently, graphite can resist high pressures applied perpendicularly to the planes, avoiding metal-to-metal contact between the workpiece and dies, thus minimizing die wear.

In combination with its high-temperature stability, abundancy and relatively low cost, it makes graphite an almost ideal raw material for these applications. However, the use of graphite dispersions is not without disadvantages. One of the issues with water-based graphite lubricants is the effect of galvanic corrosion, which is supported by the conductivity of graphite. 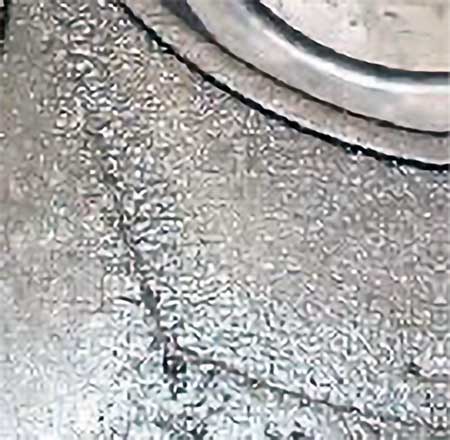 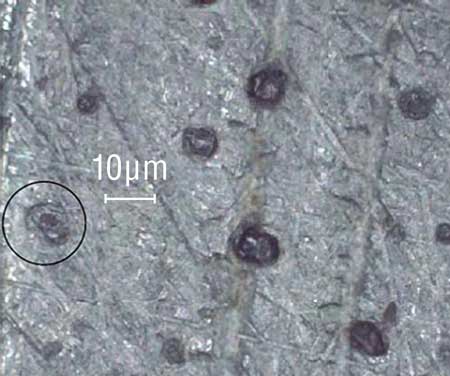 Figure 2.  a) Typical corrosion pattern at adjacent metals; b) Microscopic effect of graphite-coated steel after exposure to high humidity. A circular ditch around the graphite particles is formed from which iron has dissolved.

To overcome these disadvantages, graphite-free products have been developed during recent decades. These materials traditionally consist of a mixture of soluble organic salts and polymers. Initial generations of these products were suitable for relatively simple and flat parts. However, continued developments, screening new raw materials and polymers, and optimizing formulation led to generations of products with improved lubricity supporting metal flow for production of more complex parts like crankshafts.

Nevertheless, even with the latest developments, there is still a significant gap in performance regarding metal flow and tool life. Studies conducted at IFUM in Hanover (Germany) show a clear difference in performance in die wear, as depicted in Figure 3. This effect can also be seen in practice. In crankshaft production, we have seen that, although the parts can be formed correctly with graphite-free products like BONDERITE L-FG 185, the tool life of a preform die can drop by as much as 30% upon replacing currently used graphite products like BONDERITE L-FG F 31. 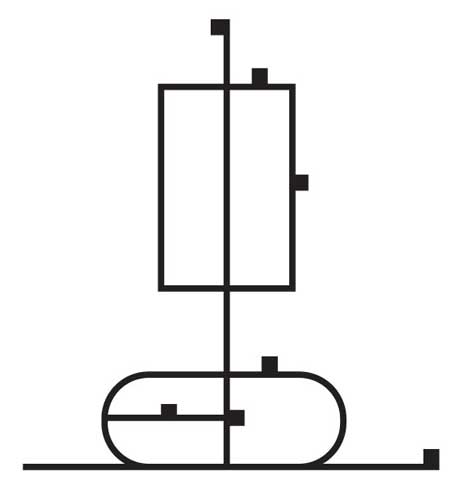 Henkel has worked on new generations of forging lubricants for years using a 600-ton press to conduct the well-known ring compression test[1,2] and an in-house variation of barrel compression as described by Yao et al.[3] In the Henkel version of the barrel compression (internal), the needed press force to compress a cylinder between two flat dies is taken as a measure of lubricant performance (Figure 4).

This development work not only showed that there is a limit on lubrication (reduction of friction force) that can be achieved with traditional approaches (Figure 5), it also showed that the frictional behavior of these synthetic lubricants is much more complex than that of the graphite-based materials. This becomes clear by varying forging parameters such as temperature, punch speed and deformation rate in a series of ring compression tests. Graphite-based lubricants result in an almost constant friction over a wide range of settings, whereas the friction for graphite-free systems is significantly influenced by parameters like temperature and forming degree (Figure 6). As such, there would be significant benefit if new concepts could be developed with tribological characteristics closer to the that of current graphite-based systems. 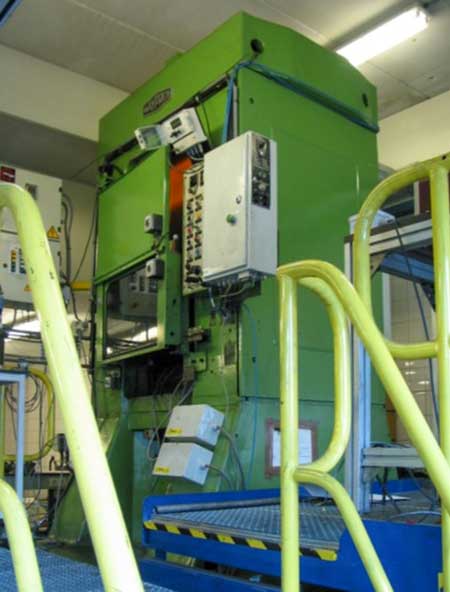 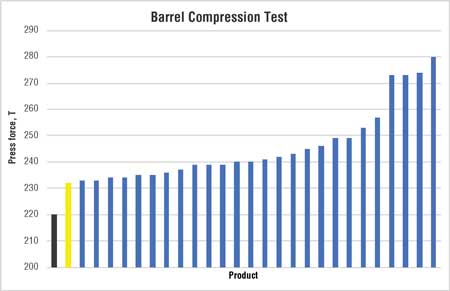 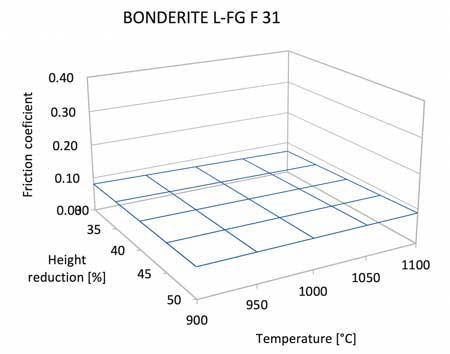 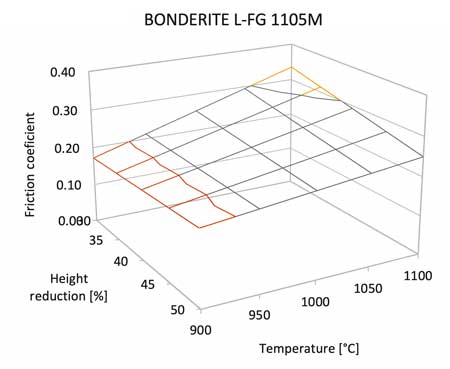 Since the performance of modern investigated chemistries appears to have reached its limits, our company has been considering new approaches to die lubrication based on the characteristics of known solid lubricants. The characteristics of these solid lubricants are often based on layered structures on a molecular level. Well-known examples of such materials other than graphite include MoS2, WS2 and hexagonal boron nitride, which have proven their efficiency in various areas. These alternatives to graphite have found their uses in industry but are, unfortunately, not suitable for application in warm and hot forging. We will discuss their use in cold-forging applications in Part II of this article.

Lubrication systems for cold, warm and hot forging have been evolving continuously toward higher lubrication performance, ease of use and better sustainability. In hot and warm forging of steel, there is a clear demand to replace graphite-based die lubricants with synthetic lubricants to improve work environment and reduce galvanic corrosion. The performance of current state-of-the-art graphite-free lubricants is, however, not at the same level, and the tribological behavior is much more complex and less predictable than that of graphite. As such, new concepts are being developed to overcome this performance.

Author G.J. Odink is Head of Product Development Functional Coatings and Lubricants for Henkel AG&Co. KGaA (Germany) – Adhesive Technologies – Automotive and Metal Industry. Questions may be directed to Thomas Scharpe, Henkel’s Manager of Business Development NA Automotive Components, ST/C&L. He can be reached at thomas.scharpe@henkel.com. All graphics supplied by the author, except where noted.

G.J. Odink is Head of Product Development Functional Coatings and Lubricants for Henkel AG&Co. KGaA (Germany) – Adhesive Technologies – Automotive and Metal Industry. Questions may be directed to Thomas Scharpe, Henkel’s Manager of Business Development NA Automotive Components, ST/C&L. He can be reached at thomas.scharpe@henkel.com. All graphics supplied by the author, except where noted.