In 2012, OTTO FUCHS of Germany considered its future growth strategies and decided to invest in a huge new press to supply large titanium and aluminum forgings primarily to the aerospace sector.

Weber Metals Inc. of Paramount, Calif., began more than 70 years ago as a scrap-metal business. Early on, its founder, Edmund L. Weber, saw an opportunity to expand beyond the scrap-metal business by using his equipment to offer forging services to the growing aerospace industry, which was developing largely on the West Coast of the U.S. Douglas Aircraft and Boeing were his major customers, providing the base that has flourished into an operation serving top aerospace companies around the globe.

When Weber died in 1974, he left the company to his wife, who put it up for sale in 1979. Germany-based Otto Fuchs Metallwerke bought the company from Edmund Weber’s widow. At the time of the sale, Weber employed 60 people, occupied eight buildings totaling 122,000 square feet and was located on 11 acres of land. The three open-die presses originally used at that time are still in service today.

Weber Metals’ new owners had serious growth strategies in mind. Between 1980 and 1990 the plant’s capabilities were expanded through the installation of larger closed-die hydraulic forging presses, including a 33,000-ton “Mesta” closed-die press that forges large aluminum and titanium parts.

Expanding during the 1990s as a major supplier of aerospace aluminum and titanium forgings, the facility grew to more than 280,000 square feet under roof spanning over 20 acres of property. Strong alliances with key customers and the company’s expanded capabilities, including entry into titanium, helped grow its market share.

The Decision to Invest

Around 2004, OF initiated a formal strategic growth plan. It identified its core competencies and major markets. Based on optimistic projections from the aerospace industry on the number of aircraft in service and potential demand for new airplanes, OF made the decision to invest in increased forging capacity to support the aerospace turbine and structural forging market.

OF’s gross revenues tripled from 2004 to 2012, and the company was envisioning the capacity constraints that would limit its future growth. Consequently, in 2012, the company began its decision-making process regarding what to invest in and where any expansion should be located. As part of its phase-one decisions, OF decided to invest in one hydraulic forging press to provide the forging capabilities to fully serve the market for all large- and medium-sized titanium and aluminum forgings. They also decided that the investment would be made in North America.

In 2014, Boeing came out with its 20-year market outlook, which expected the world’s airplane fleet to double in that time. With time passing and economic pressures growing, OF considered its phase-two investigations about where in North America to place the new press. Additionally, they had to select a press supplier, among the few that could actually design and build such a massive piece of equipment, as well as a general contractor that could excavate and pour the foundation for the press and construct the building to house the press and its supporting equipment.

With all major decisions having been made, OF broke ground on April 16, 2014, on Weber Metals’ California campus. SMS group was awarded the contract to build the press. The $180 million investment resulted in the establishment of a 60,000-ton hydraulic press complex built to produce forgings of aluminum and titanium alloys for the aerospace market, specifically for commercial and military airframes, landing gears, helicopter and aeroturbine applications, as well as super-large forgings required in other industries.

It is not often that one might see a piece of equipment and have the word “majestic” come to mind, but the new press at Weber Metals inspired just that thought. As part of a well-organized tour, interested attendees at the FIERF Technical Conference visited the new building built to house the massive press.

The press stands as the focal point on the shop floor of the 111,000-square-foot building constructed to house it and the furnaces, mobile manipulators, overhead crane and other equipment used in support of the operation of the press. Additionally, there are dedicated die-storage and logistical areas in the building.

The press is built of 9,920 short tons of steel – 23% more than the steel used to build the Eiffel Tower. The oversized trailer used for the heavy transportation of components was nearly as long as a football field (including the end zones). More than 35 heavy-transportation scenarios were required to get all the major press components on-site. The foundation platen, at more than 2,000 tons, was the heaviest single component to set. 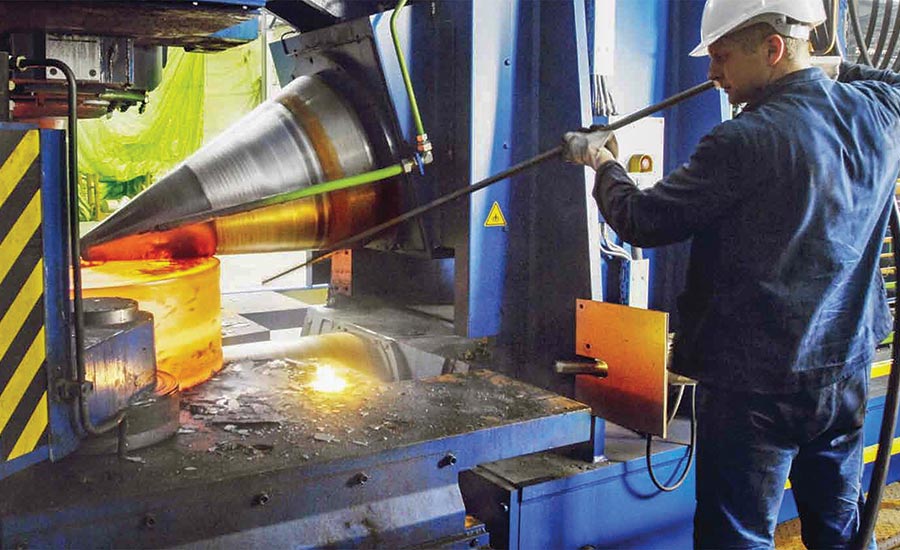 OTTO FUCHS (OF), headquartered in Meinerzhagen, Germany, is a family-owned limited partnership. What began on a small scale as a brass foundry in 1910 developed during more than 100 years into an international group of companies. The direction of the company and its 9,000 employees worldwide is in the hands of the third and fourth generation of the owner’s family.

OF is a global firm whose products are highly respected in the aerospace, automotive and transport, construction and industrial engineering markets. OF uses commercial and proprietary materials to manufacture extruded, forged and ring-rolled products of aluminum, magnesium, titanium and nickel alloys for customers who require safety, low mass, reliability and durability.

In the aerospace industry, more than 150 companies in 40 different countries rely on the company’s products. In automotive and transport, the company boasts that “hardly any car in Europe today is without Otto Fuchs components” made from more than 150 different alloys, some proprietary.

OF supplies an extensive product range of rods and extrusions to the construction sector, especially of aluminum. In industrial engineering, profiles and forged parts made from aluminum, magnesium and titanium alloys can manage rapidly oscillating and rotating movements in various types of machinery. The large presses at OF allow it to produce large-scale components, such as impellers or pistons for ship diesel engines, or couplings, articulated joints or wheels for the railway industry.

The press has four upper and four lower balancing cylinders, as well as four return cylinders. The press is so large that, when in manual mode, those who operate it are not visible to each other. They must depress buttons from two workstations simultaneously after verifying “clear” status on all sides before the forging sequence is initiated.

It is an odd, but literally accurate, play on words to say the press is impressive just by looking at it from ground level. Equally impressive, however, were all the support structures, hydraulic-fluid reservoirs and pumps, electrical systems, heating and cooling systems, mazes of conduit, etc. that extend several levels (nearly 80 feet) below the ground level. The foundation and underground levels of the press and its below-ground operations required 34,000 tons of concrete, 1,600 tons of steel rebar and 1,400 tons of other embeds. Building slabs required another 8,700 tons of concrete.

OF’s decision to build this world-class press and place it on Weber Metals’ campus in Southern California is a strategy for growth. It will favorably position the company to supply large titanium and aluminum forgings to the growing aerospace market.