Increasing scrutiny on the environmental impact of heavy-duty trucks and the desire for more fuel-efficient fleets has caused the manufacturers of class-7 and -8 trucks to investigate methods to reduce vehicle weight. This article focuses on another method for forgers to provide lightweight components, namely innovative heat-treatment schemes. This is the second of three articles that, when viewed as a whole, should provide some examples of the types of innovative thinking that will allow forgers to meet the rising demand for lightweight components.

It was established that the weight of heavy-duty vehicles could be reduced by increasing the power density of the components in the powertrain. Geometric modification is a popular and self-explanatory method of accomplishing this and was discussed in the previous article,[1] but it is only one piece of the lightweighting puzzle.

Heat treatment is another important strategy to improve the power density of parts. When applied to steel parts, this process typically takes place as a heat-and-quench operation in which the phase of the steel is modified or a carburization process in which the carbon content on the surface of the part is increased. Both of these processes increase part hardness and strength, meaning that less material is required to carry the same load and thereby reduces weight. Both methods are widely used, but innovation could improve their effectiveness and allow for the production of even lighter and stronger parts.

Currently, traditional quenching is limited by the cooling rates that can be employed. In general, heat treaters employ the maximum-possible cooling rates because this results in the strongest-possible part. Extremely high cooling rates are not utilized, however, because increasing the cooling rates beyond a certain level results in distortion and cracking due to the large gradient in the temperature and phase distribution between the thin sections of the part and the thick sections. These gradients appear because the material in a thick section can be supplied with heat from the large amount of material in the core of the section, while material in thin sections rapidly loses any heat stored in its center.

Intensive quenching is one option for innovating the heat-treatment process. It employs extremely rapid cooling rates to achieve improved hardness throughout the part and create beneficial compressive surface stresses on the part. These rapid cooling rates remove the ability for heat to conduct to the surface of the part by pulling heat from the surface much faster than the rate of conduction in the material. This eliminates the thermal gradients between thin and thick sections. Instead, the surface of the part develops a cold shell that rapidly transforms into martensite, the hardest and least dense phase of steel. This difference is illustrated in Figure 1, which shows how the steel phases develop based on the cooling rate applied during the quench.

The reduction in density at the part surface results in an expansion of the material, causing it to crowd together and create compressive stresses. These compressive stresses keep crack precursors closed so that cracks do not occur upon rapid quenching. Additionally, the increased strength of the martensite shell prevents distortion by resisting the high stresses created by the high thermal and phase gradients.

After the initial phase of rapid cooling to create the martensite shell, the cooling rate is greatly reduced so that the material in the core of the part has enough time to develop other steel phases, like bainite or pearlite, before reaching the martensite transformation temperature. This results in a mixed phase of steel in the core, which is denser than the outer shell, leaving permanent residual compressive stresses on the surface of the part. With proper adjusting of the intensive-quenching process, the part can achieve both beneficial residual surface compressive stresses and improved core hardness, which results in a component that is both stronger and more resistant to fatigue than one produced with traditional quenching methods.

The push to implement intensive quenching as a mainstream manufacturing process is largely being led by a company called IQ Technologies Inc.,[3] and a more detailed description of the intensive-quenching process than is given here can be found in their literature.[2] They have demonstrated the benefits of intensive quenching on a variety of parts, including metal-forming punches, output shafts, pinion gears and universal-joint crosses.[4] Their success in applying intensive quenching to these parts indicates that it may be an important element in reducing the weight of heavy-duty trucks. In order to investigate the potential benefits of applying this process to heavy-duty trucking components, the finite-element method was used to examine the potential mechanisms through which intensive quench can be used to reduce part weight.

The heat-treatment problem is difficult to solve because it consists of three mutually coupled problems that must be solved simultaneously, which makes a comprehensive simulation of the quenching process computationally expensive. For the purposes of determining how the intensive-quench process might be applied to heavy-duty trucking components, however, it is not necessary for this exacting model of the heat-treatment process to be used.

Instead, simulations were run by removing some of the system interactions, like the creation of heat due to plastic deformation and the release of latent heat during a phase change. This ensured that the mutual system coupling was removed while the major interactions remained (Fig. 2). Simulations of both oil quenching and intensive quenching were carried out so that the comparative benefits between the two processes could be identified. The two processes were differentiated by the cooling coefficients applied to the surface of the part. The temperature-dependent cooling coefficient used to describe the oil quench and the time-dependent cooling curve used to define the intensive quench are given in Table 1. ANSYS Workbench 17 was used to carry out the simulations with various subroutines added to allow for the calculation of phase change and its effects. 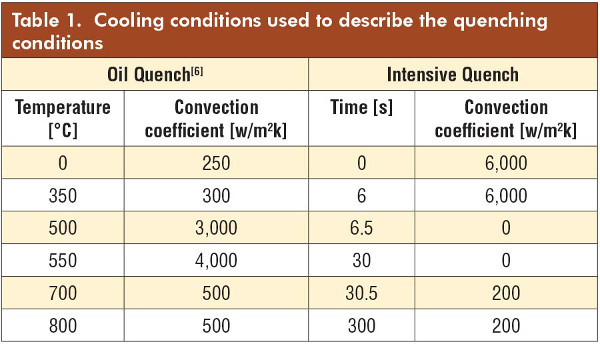 The component simulated in this investigation was the heavy-duty axle shaft, which was examined under two loading conditions: full-floating and semi-floating. The material used to model the part is AISI 4140 steel, whose properties are described in Table 2. The dimensions of this part are given in Figure 3. In order to determine the phase distribution of the part, the continuous-cooling transformation curves provided by TimkenSteel for AISI 4140 steel were used.[7] The properties of each steel phase are given in Table 3.

The intensive quench, on the other hand, creates a nearly uniform shell of cold material all around the part in the initial stages of cooling followed by a much more even cooling in the later stages of the process. Another interesting result is that the intensive quench cools the part much quicker than the oil quench in the initial stages of the cooling but achieves a temperature similar to that of the oil quench after 150 seconds.

These differences obviously have a major effect on the phase distribution in the final part. The final distribution of martensite in the axle shaft is given in Figure 5. The increase in the cooling rate in the first stages of the intensive-quenching process resulted in the intensively quenched part having a higher volume fraction of martensite than the oil-quenched parts for all areas. At the same time, the intensive quench caused a shell of pure martensite to be formed on the outside of the part while a mixture of bainite and martensite was established in the center of the shaft.

In addition to the effects on the residual stresses in the part, its phase distribution has an effect on the total strength of the part. Specifically, the increased volume fraction of martensite in the intensively quenched part will result in increased hardness and strength. The result of this increase in strength is an increased safety factor when the part is in service.

To demonstrate this, the FEA models containing the residual stresses from the two quenching schemes were combined with simulations of the axle shaft under the full-float and semi-float loading conditions. The results of these simulations were then compared to the estimated ultimate tensile stress of the part to determine what the minimum safety factor, SF, was for each case, as shown in the equation.

The minimum safety factors for the full-float case were 4.00 and 4.34 for the oil- and intensive-quenched parts, respectively. For the semi-float case, they were 3.78 and 4.08, respectively. Clearly, this increase in the safety factor means that some material can be removed without negatively affecting the strength of the part by switching the oil quench to an intensive quench.

In this particular case, a weight savings of 3% was achieved by applying the intensive quench to an axle shaft with a smaller diameter, but it is important to note that greater reductions could probably be achieved by optimizing the intensive-quenching process.

Another interesting benefit of the intensive-quenching process is that the compressive residual stresses on the part reduce the severity of the alternating stresses on the surface of the part. This is best illustrated by looking at the axial stress in the shaft under the simultaneous bending and torsion loads of the semi-float load case.

Figure 6 gives a contour map of these stresses with a cross section at the point of maximum stress due to bending for both the oil- and intensive-quenched part. The stress pattern in the oil-quenched shaft is nearly exactly what one would expect of a beam under bending (i.e., large tensile stresses on one side of the shaft and large compressive stresses on the other side).

Another change in the stress pattern in the intensively quenched part is the development of tensile stresses in the core of the part. Because fatigue cracks are likely to start on the surface of the part, however, the development of these stresses is less important than the reduction of alternating surface stresses. Overall, the increased fatigue life of parts that have undergone intensive quenching over the traditional oil quench should allow them to be lightened while still achieving improved mechanical properties and performance.

Clearly, the development of innovative heat-treatment schemes can play a key role in the weight reduction of heavy-duty trucking components by creating high-power-density parts. In the case of intensive quenching, the process allows for the use of extreme cooling rates that make it possible to achieve harder and stronger components than their oil-quenched counterparts.

Additionally, the unique phase distribution created by the process creates compressive residual surface stresses that help to improve the fatigue life of the part by reducing the severity of alternating stresses that may appear when the part is in service. The increased strength and fatigue life of the part allow a high-quality part to be created using less material, which has the dual benefit of reducing component size and weight.

Furthermore, there is the potential for even greater weight reductions by combining this innovative heat-treatment scheme with other weight-reduction strategies, such as the hollow geometries proposed in the previous article. This would allow for the creation of compressive residual surface stresses on both the inside and outside of the part. A synergistic effect like this could greatly reduce part weight and increase component performance.

The authors would like to acknowledge the support of both the Forging Industry Educational and Research Foundation (FIERF) and the American Iron and Steel Institute (AISI), which made it possible to carry out this research.