This article examines the technology of cross-wedge rolling (CWR) in the production of railway axles, as well as new equipment for its realization. Some theoretical bases for the rolling of such axles have been considered and confirmed, resulting in axles of higher fatigue strength. The new method enables a significant increase in processing speed; improved rough axle accuracy; and decreases in scrapped pieces, metal consumed and labor content.

Railway axles such as that shown in Figure 1 are key components in rail transport. As such, very strict quality and reliability requirements are applied to them since their failure in active service can result in catastrophe. Such a failure in service is caused by metal fatigue, which takes place at stresses that are less than the material yield point. 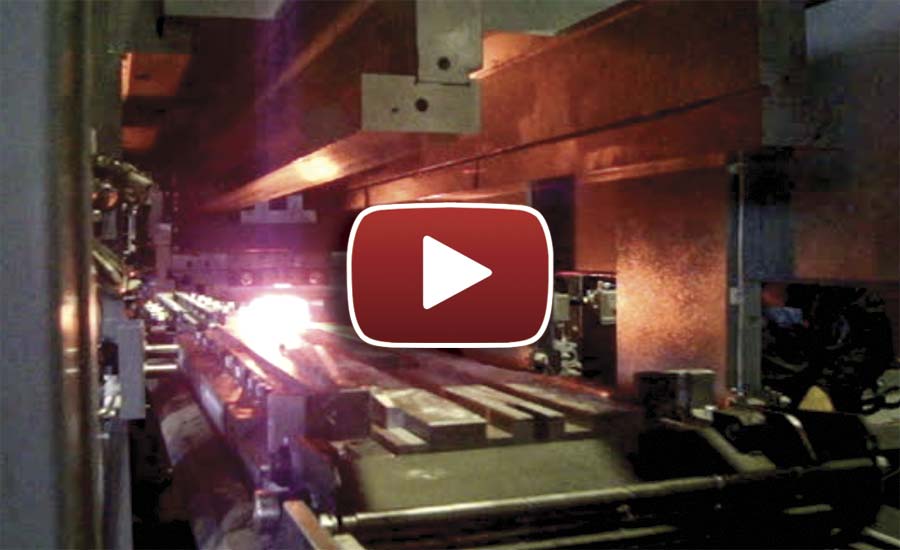 See a video of the cross-wedge rolling process online at www.FORGEmag.com/CWR

Aside from the traditional manufacturing requirements of high productivity and economical metal and energy consumption, failure mechanics dictate that the technology of manufacturing railway axles at the stage of a forging blank has an additional requirement of obtaining high fatigue strength.

Consequently, the manufacture of a railway axle using a cast blank is prohibitive in that it does not ensure the required quality. Traditionally, railway axles are manufactured using blanks forged with hydraulic presses, radial forging or cross-screw rolling. It is possible that a continuously cast blank may also be used. The forming of the blank refines the metal structure, and it increases its fatigue strength. The standard for a railway axle anticipates a U-setting ratio of U ³ 3; that is, the reduction of a steel ingot’s cross-sectional area by no less than a factor of three.

The authors have developed a method of cross-wedge rolling (CWR) railway axles, the specification of which is given in Table 1. This technology has yielded the highest productivity – up to 120 axles per hour (less allowances and tolerances) – and achieves minimal metal consumption that helps minimize labor input doing finishing work at the lathe.

The high accuracy of a cross-wedge-rolled piece[1] allows the exclusion of some additional operations of other technologies such as the cutting of end wastes and the correction of an axle, which takes place after plastic deformation. The CWR mill (Figure 2) has two movable plates, which, along with flat tools, ensure the relatively high accuracy and linearity of a forged axle. CWR mills equipped with flat tools ensure a decrease of up to 10 percent in the cost of axles in comparison with those with roller tools. The life expectancy of a CWR flat tool, including midlife repairs, is no less than 500 000 axles, and it decreases tool cost per axle to 1.7%.

The weight of a CWR mill is 260 tons. It is 1.7 times less than that of a radial forging machine (GFM SX-40). Thus, the price of the CWR mill is lower. Moreover, a mill that is vibration-free can be set on the shop floor without a specially-constructed foundation bed. Because the operation of the mill is fully automated, round-the-clock operation is possible. A railway axle is manufactured with each mill cycle.

Evaluation of railway axle stress-strain and microstructural data from the rolled metal structure yields an increase in fatigue strength of the axles manufactured using the CRW method.

Consequently, the technology and equipment for the CWR of railway axles:

Compared with other forging methods, CWR ensures the forming of favorable properties symmetrically from the center of the axle and ensures better coaxial alignment of axle steps because of their continuous contact with the tool during the entire rolling cycle.

G.V. Kozhevnikova is with Physical-Technical Institute of the National Academy of Sciences of Belarus; Minsk, BELARUS

A. Rudovich is with AMT Engineering Center; Belarus, Russia.

V.Y. Shchukin is with Physical-Technical Institute of the National Academy of Sciences of Belarus; Minsk, BELARUS