All Aluminum at Quality Aluminum Forge

In this final of three articles featuring the operations of SIFCO Industries, we profile Quality Aluminum Forge (QAF) of Orange, Calif.

In the late 1960s, two companies were formed in California to produce near-net-shape precision forgings of aluminum. The companies, Diversified Forge of Long Beach and Webster Forge of Orange, were started to supply forgings to the aerospace industry. One of the original investors of Diversified Forge was famed racecar driver Mickey Thompson, who needed the facility to produce pistons for his racing engines.

In the mid-1970s, both companies were acquired by Krop Forge, whose CEO (Gerry Liccardi) combined them into Quality Aluminum Forge (QAF). Business continued as usual for about a decade until Liccardi decided to sell QAF to a private equity firm in 1987. In 1990, Mamco Manufacturing (a Seattle-based supplier to Boeing) and QAF merged.

By 1994, QAF (as part of Mamco/QAF) introduced machining centers into its forging operations so it could deliver finished parts to customers and establish itself as a full-service supplier. Mamco/QAF grew during the next nine years and in 1999 attracted a buyer, Nuvant Aerospace. Business continued unabated until five years later when, in 2004, Liccardi bought QAF back from Nuvant. Unfortunately, Liccardi suffered a fatal accident six months later and the company was taken over and owned by a financial investor until SIFCO Industries purchased it in 2011.

QAF is currently comprised of three facilities. Its headquarters, administrative and main manufacturing facilities are located in Orange, Calif., where two of the company’s largest presses are housed. The facility in Long Beach is a forge shop only, supporting the Orange facility. In July 2013, QAF acquired General Aluminum Forge of Colorado Springs, Colo., a former competitor that specializes in seamless valve bodies and whose products helped broaden the scope of QAF’s offerings. Similar to Long Beach, the Colorado operation is a forge shop only.

Of the three facilities, Orange is by far the largest. This operation has grown over the years, taking space as available, and presently occupies buildings on two sides of the street. Over the next 18 months, QAF is planning to consolidate its Orange operations onto one side of the street and construct a larger building that will provide the operations team the opportunity to lay out a streamlined process flow. The target date for this is fall 2015. QAF is a non-union shop, and about one-fourth of its associates have been there longer than 25 years. Similar to SIFCO’s Cleveland and Alliance, Ohio, operations, Orange has multiple associates with more than 35 years of service.

QAF’s basic business is the production of near-net-shape aluminum forgings, which are machined as needed and shipped as finished parts. The company makes structural parts and connectors, fittings, valve bodies, manifolds and other custom configurations. Virtually all of the production from the company’s presses is made of aluminum destined for the aerospace market. Nearly three-fourths of this production is intended for use in commercial, fixed-wing aircraft.

Once an order is placed, the decision is made regarding the type of tooling to be used. Depending on the component to be forged, the die may be a two-piece conventional die (top and bottom) or a three- to five-piece segmented die for more complex parts. QAF starts the process using round extruded bar stock ranging in diameter from 0.75 to 8 inches. Once the material is selected, it is cut into appropriate billet lengths. Orange manages raw material and cutting operations and provides ready-to-forge billets to Long Beach, while Colorado Springs cuts their own material.

The most common alloys that QAF uses are aluminum grades 7075, 7050 and 2219 – all aerospace alloys. Lightweight parts provide aerospace customers with savings every flight. QAF specializes in the design, forging and machining of thin-walled components to meet customer specifications. The component’s strength comes from proper grain orientation, which is achieved through maintaining the correct material movement during deformation. This is important to achieve optimal strength in service while controlling weight.

Once a billet is removed from the furnace, it is sprayed with a water-based lubricant that helps the material flow under deformation in the dies. The raw part, once forged, is cleaned of the lubricant by submersion in a series of six tanks containing a solvent bath.

Parts then have their excess flash material removed. The part either goes back to the press for additional deformation or moves on to heat treating and finishing. On average, a part recycles back through the forging process three times before it is ready to move to the heat-treat station.

Once a clean, flash-free part is cleared for the next station, it goes into heat treatment for routine stress relief. After this is achieved, the part is checked for straightness and then age hardened. Samples are tensile-tested to confirm that the parts meet their required strength.

At this point in a ferrous forge, the next step would be deburring and dye-penetrant inspection. Some of QAF’s aluminum parts do just that, as well as hardness and conductivity testing. However, 50% of parts forged at QAF head straight to the machine shop.

Machine Shop and Other Facilities

As part of its strategy to become a supplier of finished parts, QAF has invested heavily in machining capabilities so that it can machine the components it forges into finished parts. The company forges its parts to near-net-shape dimensions, orienting the part’s grain structure in such a way as to increase strength and reduce wall thickness (and weight). QAF then sends the parts to the machine shop for final production steps and, if required, assembly.

QAF machining and assembly operations include 3-, 4- and 5-axis machining centers as well as honing equipment. About 50% (and growing) of its forged components require further machining into their final configuration. Of these parts, QAF will maintain some inventory to release as needed to meet customer demand.

The company’s aggressive approach to bolster its status as a supplier of forged and finished parts led to strengthening its engineering capabilities and personnel. CATIA and DEFORM software now provide shorter new-product development times and free up press time that was once necessary to test and fine-tune designs. Other areas of the business have been upgraded as well, including digital inspection equipment (Romer Arm) and a dedicated resource to support SIFCO’s corporate SMART (continuous-improvement) program.

Although its parent company, SIFCO Industries, strategically positioned it as a “pure play” forging business, QAF offers its parent some material diversity in that it forges only aluminum and supplies fully finished parts and assemblies.

SIFCO Industries COO Jim Woidke said, “Quality Aluminum Forge and General Aluminum Forge have been important strategic additions to our portfolio of companies. Their capabilities, especially the machining and assembly operations, fit nicely into our current and long-term plans.”

In keeping with this strategy, QAF has been visiting its customer base to find additional component candidates that can be forged and machined to the proper dimensions and grain orientations. Quality Aluminum Forge is positioning itself as a supplier of finished components – a true full-service forge. 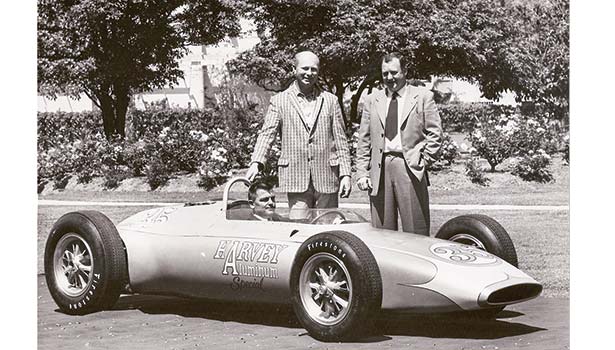 The Strange Case of Mickey Thompson

One of Quality Aluminum Forge’s original investors was Marion Lee “Mickey” Thompson(1928-1988), an American off-road racing legend. In his twenties, he became involved in the then-new sport of drag racing. He had a great career as a driver, designer and automotive technician. He is said to have set more speed and endurance records than any other man in automotive history. At the Bonneville Salt Flats in 1960, Thompson achieved international fame when he became the first American to break the 400-mph barrier – hitting 406.60 mph in Challenger I. Thompson also had extensive involvement in the Indianapolis 500 as a designer and promoter. Over the course of his career, Thompson raced everything from stock cars to off-road vehicles and engineered numerous competition engines.

QAF as a Full-Service Supplier

A QAF customer recently had a good look at their sourcing and procurement of finished parts for their production requirements. They had previously regarded forged aluminum components as “raw materials” and were taking delivery of forgings from QAF. These were received, inspected and then shipped to another company for finishing.

Once the finished part was complete, it was shipped back to the customer and inspected again before being added to inventory. This is very much the traditional “we’ve always done it this way” approach. It works, but there is extra cost, time and risk involved, all of which have the potential to interrupt production or create additional contingency costs.

The customer looked at the full range of QAF’s capabilities and services. They saw that QAF offers a state-of-the-art machine shop and the ability to deliver fully compliant finished parts. They examined their current process and the costs associated with it and asked QAF to quote on the delivery of inspected, finished parts.

Following the customer’s evaluation, QAF now delivers the finished parts. This has enabled the client to realize cost and time savings in several areas of the process, including shipping, inspection, risk contingency and work in progress.

As a finished-parts supplier, QAF offers a number of services not normally identified with a forging company and which can add value for the customer.