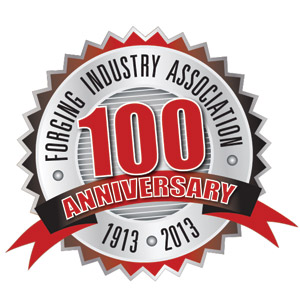 In case you weren’t aware, the Forging Industry Association (FIA) is celebrating its 100-year anniversary in 2013.

Back in 1911 a group of almost 60 drop forging companies met at the Murray Hill Hotel in New York City for the first time. C.E. Adams of Cleveland Hardware Company was made chairman, and he then appointed W.R. Anderson of Anderson Forge and Machine secretary. Adams said the meeting was a “get-together and get-acquainted affair, with no idea in view of having any definite action taken upon the forming of a permanent organization.” Several hours of discussions related to dies and cost-keeping then ensued. According to all existing records, no shots were fired.

The question of a permanent organization was touched upon during the course of the meeting, but it was deemed advisable not to form any association at that time. However, if after a report of the meeting was sent to everyone it was considered advisable to call a subsequent meeting in the course of three to six months, they would do so. Without a single exception, it was declared that “the idea of getting together officials of all drop forging companies was an excellent one.” A few more informal meetings resulted in the formation of the American Drop Forging Association (ADFA) in 1913.

According to the constitution of the ADFA, “The object of this association shall be to advance the interests of the managers and superintendents by careful and concerted study of any financial, scientific, mechanical or human matters pertaining to the trade. The association shall also aim to promote social intercourse between members.” These core objectives live on today at FIA, where our mission is “Improve Member’s Global Competitiveness” via the six strategic goals of Advocacy, Benchmarking, Driving Demand, Global Networking, Technology, and Training & Education.

While in the process of sifting through the history of FIA, I have been impressed with the long-term commitment of so many of our member companies. We have nine companies that have been members for over 75 years, and four of today’s member companies (Cleveland Hardware, Keystone Forging, Queen City Forging and Wyman & Gordon) were in attendance at the meeting in 1911. In addition, when I look through the listing of FIA’s past leadership of Board Members and Past Presidents, the multi-generational family commitment to FIA is amazing. Fathers have passed down to sons the importance of not only supporting FIA financially but also giving their time and talents to advance the industry through their trade group.

Lastly, my small role in this endeavor is very humbling when I consider that I am only the sixth person to hold the position of Chief Staff Officer of FIA since 1935. The list includes such giants as Ray Seabury, Bob Atkinson and Charlie Hageman. The individuals who have played such an important role through the years illustrate that we are all caretakers of this institution. Our objective now is to keep FIA relevant for the next 100 years.

Fit one of FIA’s events into your calendar in 2013, and I’ll cut you a piece of birthday cake!