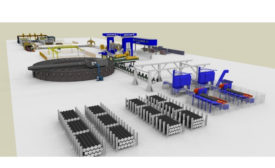 Andritz received an order from Allegro, a subsidiary of Evraz and RailService established to produce train wheels in Russia, for a complete production line for train wheels. The production process includes several stages. Blanks produced by Evraz are heated to 2282°F (1250°C) in a rotary-hearth furnace, then descaled and pre-formed in a hydraulic press with 10,000 tons of press force. The blanks are then rolled in a wheel-rolling machine developed by Schuler and forged into a finished product in a crimping and piercing press with 5,000 tons of press force. This is followed by a geometric test in a laser measuring system and permanent marking in a marking press. Finally, the wheels undergo heat treatment, and the running surfaces are hardened. 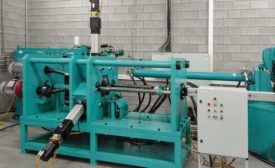 Solid railroad axles can be produced with a variety of metal-forming techniques. This article reviews these techniques and focuses on a more recent method called skew rolling, which is performed using three rolls to form an axle profile according to product specifications.
Semyon Brayman Dr. Tomas Z. Bulzak Alexander Roudovitch Zbigniew Pater Janusz Tomczak
No Comments

A rail axle is a round steel rod whose cross section varies along its length to conform to the individual purpose of the parts and stresses that occurs in it. The types of unfinished axles that may be produced, depending on the production method, include solid axles and hollow axles.