S. Brayman is President of ERS Engineering Corp., West Bloomfield, Mich. He can be reached at 248-538-9082, sbrayman@ersengine.com. For additional information visit www.ersengine.com. 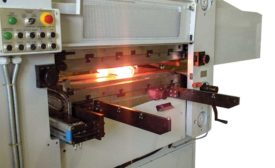 Cross-wedge rolling (CWR) is a forging technique in which a heated billet is formed by rolling it between two flat (or cylindrical parallel-axis) die plates. This article describes the CWR process and equipment as applied to the production of railroad screws and other similar products.
S. Brayman A. Roudovich
No Comments

The cross-wedge rolling (CWR) technique was conceived at the end of the 19th century and was believed to be ahead of its time.