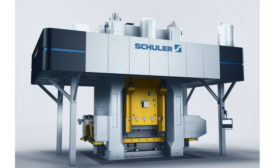 Otto Fuchs KG ordered a crank forging press with ServoDirect technology from Schuler for its Shenyang, China, location. The automotive supplier will use the machine, which has a press force of 3,150 tons, to produce more aluminum chassis components for customers in China. In crank forging presses with ServoDirect technology, several torque motors operate on a main shaft via a step-down gear unit. They are suitable both for wear-free single-stroke operation and for forging in continuous operation. 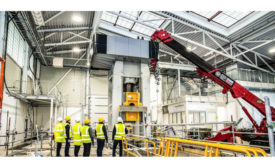 The University of Strathclyde’s Advanced Forming Research Centre (AFRC), part of the National Manufacturing Institute Scotland, is opening an office in Sheffield, United Kingdom, to provide local forging and forming houses with easy access to support from the research center located near Glasgow Airport in Scotland. Supported by Sheffield City Council and operating out of an office on the Olympic Legacy Park, the AFRC’s new base will effectively bring the research lab directly to the manufacturers. The office will help South Yorkshire companies tap into leading metallurgy capabilities, numerical and analytical process modeling tools, and some of the most advanced industry-scale forging and forming equipment in the world over 260 miles away in Scotland. 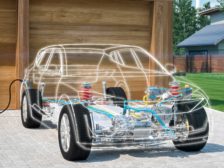 Forging the Future of Transportation

Kerry Kubatzke
No Comments
As the domestic automobile and light-truck markets gradually trend toward various electric vehicle (EV) designs, forgers are faced with both challenge and opportunity.
Read More 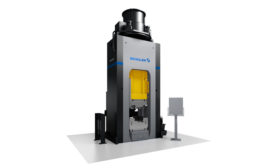 Mosdorfer GmbH, a manufacturer of fittings for high-voltage overhead lines, ordered two screw presses and five C-frame presses from Schuler. According to Schuler, its screw presses with ServoDirect technology are the ideal solution for Mosdorfer’s new forge in Weiz, Austria. The press models have 2,100 and 1,100 tons of press force. Thanks to the servo motors, the screw presses have a lower design and offer improved drive controllability and higher starting torques with shortened stroke cycle times. The closed water-cooling circuit for the servo motors results in optimized temperature stability of the drive system independent of operational air conditions. 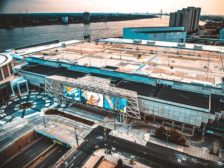 After a longer-than-normal, COVID-19-related hiatus, FIA will resume its Forge Fair cycle. Forge Fair 2021 will be held at Detroit’s TCF Center starting October 26 and ending on October 28. This article will give you all the pertinent information to start planning your Forge Fair experience.

Sheffield Forgemasters to be Acquired by U.K. Ministry of Defence

The U.K.’s Sheffield Forgemasters is being acquired by the Ministry of Defence (MoD) to support a substantial recapitalization of the company’s defense-critical plant and equipment over the next 10 years. The investment will secure Sheffield Forgemasters’ role as a critical supplier to the next generation of U.K. defense programs while continuing its independent commercial activities, serving markets such as civil nuclear, oil and gas, power generation, renewables and steel processing. 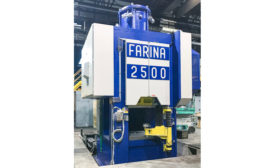 A. Benevenuta & C. S.p.a. ordered a 2,500-ton mechanical forging press from Farina, a Schuler affiliate. The company produces hot-forged steel components for the automotive industry near Turin, Italy. The parts are used in suspension systems, transmissions, engines and brakes in passenger cars, tractors, trucks and earth-moving machinery. The press force of the Benevenuta production lines ranges from 1,200 to 2,500 metric tons. 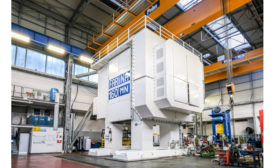 Schuler and its affiliate Farina demonstrated what the companies say is the world’s largest mechanical forging line to an international group of 60 forging experts. A live video stream transmitted from the production site in Suello, Italy, highlighted the features of the 16,000-ton press, which has a stroke of 600 mm, in action. The press will be delivered to Germany’s thyssenkrupp Gerlach. Due to its Scotch Yoke design, the press has a total height of 14 meters – making it much smaller than conventional presses. This enables high off-center loads and a high number of strokes. From the outside, the GLF-type machine looks like a conventional press, including the flywheel, clutch and crown gear. However, the Scotch Yoke directly works in the slide, which is the reason for the compact design. 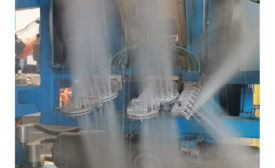 Automotive supplier Ningbo Xusheng Auto Technology Co. Ltd. of China issued the Final Acceptance Certificate to SMS group for a fully automatic closed-die forging line. Installed at the company’s Ningbo location in the province of Zhejiang, the forging line consists of an eccentric forging press and, as a pre-forming unit, an automatic forging roll. The press operates with a maximum press force of 25 MN. Ningbo Xusheng is using the line to produce aluminum chassis components, especially for electric vehicles. With support of specific simulation software, SMS group cooperated with Ningbo Xusheng to jointly develop the technology and the dies for the aluminum forging process. 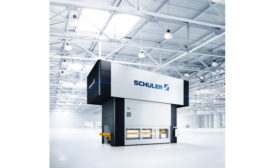 Schuler Service repaired two machines damaged in a fire at Mühlhoff Umformtechnik, an automotive supplier in Uedem, Germany. As a result, part production on a new 2,000-ton press from the TSD series can also start on time – all within just 12 months of the fire. Because drive components with long lead times were already accessible, Schuler was able to shorten the time to commissioning by three months. This happened even though the experts on site had to contend with challenges such as the foundation, which was designed for the previous and significantly smaller 800-ton line.