This article looks at ways our means of transportation – how we get from here to there – are heat treated. We start with aerospace and then consider vehicular transportation followed by manual propulsion.

Although we may think of the jet engine as a modern-day invention, Hero of Alexandria, a first-century-AD mathematician, invented the aeolipile. Not having a practical application, it was little more than a curiosity.

In the 13th century, the true inventors of the rocket were the Chinese. It was used for fireworks and to propel weapons, but it was not further utilized for hundreds of years. The turbine engine was first pa-tented in 1791 with the intended use being the horseless carriage.

Other work was done, but it was not until 1928 when Frank Whittle, a 21-year-old Royal Air Force cadet, published a thesis proposing aircraft jet propulsion. In 1941, Whittle’s engine was first used to power an airplane. The adoption of the jet engine quickly challenged the metallurgy of the day to deal with the unique material issues of such a high-speed and high-temperature device.

The basic operation of the jet engine involves vanes that move the air to propel the blades. The com-pressor and turbine sections of the engine contain alternating rows of vanes and blades. As the air is compressed, its temperature rises. This air is then mixed with fuel and burned to further raise the temperature. It is this high-energy gas that is used to propel the first-stage, high-pressure turbine (HPT) blades. The efficiency and performance of jet engines are determined by the ability to achieve very high gas temperatures.

2Developing the materials able to handle these higher temperatures is always the goal of aero-space-engine designers. The fan blades, which can be more than 50 inches long and rotate at several thousand revolutions per minute, are typically made from titanium for its light weight and strength. Remember that these fan blades also need to be designed to survive the impact of a bird.

The compressor section can see temperatures over 1000°F, and the materials must be designed to live in this environment. Typically, an iron- or nickel-based superalloy is used here. The keys to material survival in this part of the engine are high elevated-temperature strength, the ability to resist creep and crack growth, oxidation resistance and erosion prevention.

The combustion chamber is a huge challenge for materials, which see temperatures of 1800°F or higher. Materials used here are typically nickel- and cobalt-based superalloys. In addition to the high-temperature alloys, the blades are often directionally solidified, which results in the grains aligning along the length of the blade. Alternatively, single-crystal blades may be used. These are the ultimate because there are no grain boundaries to weaken the structure.

Because of the intense heat seen by the turbine, each blade contains “labyrinthine airways.” Cool air from the compressor passes through these channels, which allows the turbine to survive in gas streams with temperatures higher than the melting point of the alloy!

Notable bird-strike events have resulted in disabled jet engines, some catastrophically. In addition to the US Airways flight that crash-landed in the Hudson River, a 757 in England hit a bird on takeoff and lost an engine. In Rome, a 737 hit a flock of birds during landing. Back in 1995, an Air Force plane crashed – killing all 24 on board – after it collided with geese.

Jet-engine designs are rigorously tested to be able to withstand bird strikes. Some things are simply more than what we can expect from the limits inherent in metals and materials. For this reason, the FAA is testing radar – calibrated to detect birds – that can inform pilots where birds are. The Navy and Air Force currently utilize this type of radar.

Specialized materials, many of which are thermally processed, are used in the design of today’s jet engines. The challenges of design engineers also include criteria such as noise reduction and fuel efficiency. Tomorrow’s materials may be birthed from the mother of the invention needed to improve efficiency or safety.

Many of you are probably unaware of the number of different types of bridges. Just the basic list includes beam, cantilever, arch, truss, suspension, cable-stayed, movable, floating and combination bridges. Within these basic categories there are a number of subcategories as well. Movable bridges, for instance, include the bascule (drawbridge), vertical lift and the swing to name just the most com-mon.

The basic characteristic of movable bridges is that they can be moved to allow other traffic to pass. The drawbridges of medieval times were the original movable bridges. These were raised by ropes and pulleys. In the 16th century, Leonardo da Vinci designed a movable bridge for military purposes. The most famous bascule bridge in the word is probably Tower Bridge across the Thames in London. Originally, Tower Bridge was hydraulically operated using steam power from coal-burning boilers. To-day, the hydraulic mechanism is driven by oil, and it is powered by electricity.

Drawbridges in which one or two opposing leafs are raised to allow marine traffic to pass underneath are the most familiar type of bascule bridge. The “modern” era of the bascule bridge was christened with the Van Buren Street Bridge in Chicago in 1893. Today, Chicago has between 37 and 43 movable bridges, with at least 20 in the downtown area. A website dedicated to movable bridges in the British Isles currently documents 2,355!

Working much like a child’s seesaw, a counterweight balances the span (or leaf) during its entire up-ward swing. In fact, bascule is a French word for seesaw and balance. The counterweights may be located above the bridge or below the deck. One type of bascule bridge is the trunnion design in which the bridge rotates around a large axle called a trunnion. Many of Chicago’s movable bridges are this type. The other is the Scherzer rolling lift, which raises by rolling or rocking like a rocking chair on a track. Joliet, Ill., has a number of this type of bascule bridge.

Moving these bridges is not a trivial matter. Each leaf of the Woodrow Wilson Bridge spanning the Potomac River linking Maryland and Virginia weighs 4 million pounds, and the total load to move is over 32 million pounds.

Thermal processing is at work in many of the details of bridge construction, particularly construction of a bascule bridge. A 1918 schematic of a Chicago-area bridge shows specific types of steel and processes such as forging being required for specific parts. Steel continues to be a huge development area in bridge construction. High-performance steel has been used in bridge construction for decades. Research has utilized this steel to re-engineer I-beams with corrugated webs, making them thinner but stronger than previous beams. 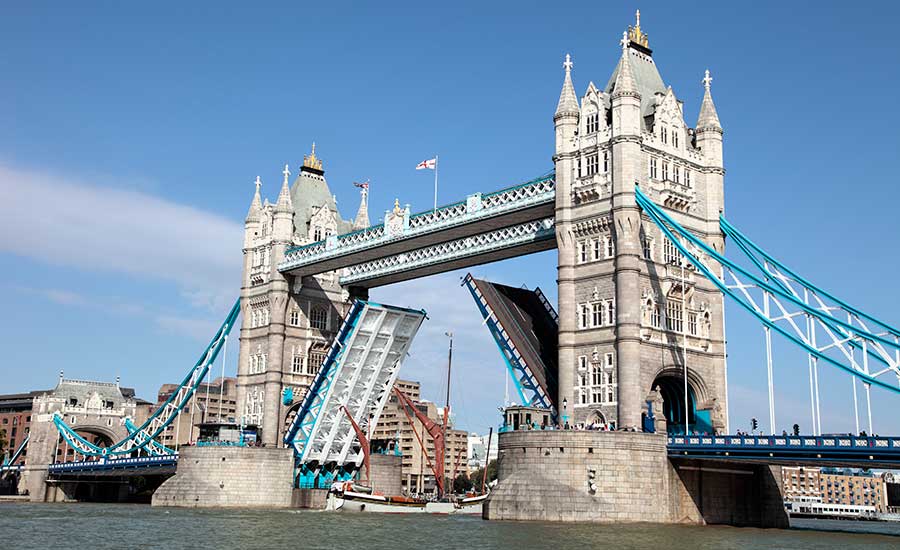 In bascule bridges, which may require a range of gears and motors, state-of-the-art material and processes such as induction hardening or vacuum carbonitriding might be specified for gears. Some bearings are surface-hardened and others are through-hardened. The largest of these bearings and gears is also forged for optimum integrity and longevity.

Although it is not a bascule bridge, one of the more interesting bridges constructed this century is the Magdeburg Water Bridge. Completed in late 2003, this water bridge is actually a canal through which boats can float over the Elbe River. Using 24,000 metric tons of steel and 68,000 metric tons of concrete, the water bridge connects Berlin’s inner harbor with ports along the Rhine River.

Whether a bridge raises to allow ships to safely pass underneath or a water bridge transports ships over other ships, thermal processing and metallurgical advancements make bridges safer. 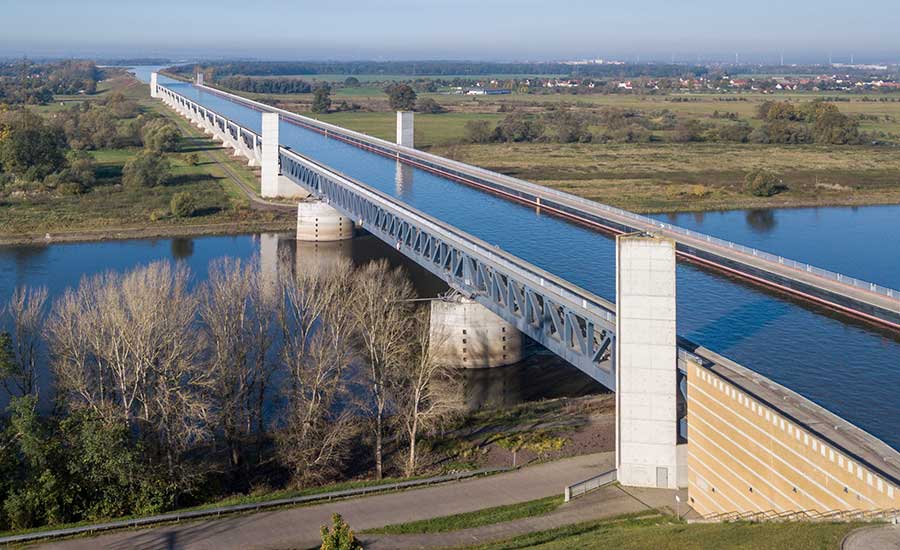 There’s nothing quite like a bicycle ride in the country on a nice autumn day! If you’re like most folks, your bicycle has a name like Murray, Huffy or Schwinn. Not all bikes are created equal, however. Heat treatment and material selection are the key variables in bicycle frames. We will do our best to sort it out for you.

The velocipede was invented in 1865. It was also an all-wood device with either wood or metal tires. Pedals were applied directly to the front wheel, and it was designed to be ridden. It became known as the bone shaker because of what it did to the rider on cobblestone streets. Because of this, indoor riding academies were built in larger cities for riders of the velocipede.

Metal was first introduced to the bicycle in the 1870s with the high-wheel bicycle. Like its predecessor, the pedals were attached directly to the front wheel. But unlike the velocipede, the front wheel grew in size because the larger the wheel, the farther you could travel with one rotation of the pedals. This cycle became popular with “young men of means” because the cost was six-month’s pay for an average worker.

The bicycle craze called the “Golden Age of Bicycles” was started by the initiation of several new innovations, such as John Boyd Dunlop’s pneumatic tire in 1888. Soon after this, the rear freewheel was developed, which allowed the rider to coast. This led to the 1898 invention of coaster brakes. Although they were adopted slowly, derailleur gears and hand brakes were also developed during this time.

In the last century, the bicycle frame has been the key area of development. The objective is to make the frame lighter so that the bike is easier to move with the same amount of effort. As a result, the early plain-carbon steel frames gave way to hardenable 4130 chrome-moly alloys for the high-tech bikes. While steel is still being used, many of the high-end bikes are utilizing aluminum, titanium or composite materials to further reduce the weight. Each material has its “strengths” and weaknesses.

Chrome-moly steel (4130) is commonly used because of its weldability, formability, strength, ductility and toughness. The alloy is typically heat treated at 1600°F followed by an oil quench. Tempering is performed at 750-1050°F based on the desired strength requirement. No post-weld heat treatment is necessary with this material.

Although titanium is half the density of steel and aluminum is about one-third the density, a steel frame does not weigh three times as much as aluminum. One of the benefits of steel and titanium over aluminum is that they have a fatigue limit below which a repeating load will not cause failure. Aluminum does not have this endurance limit, meaning that even a very small load applied for enough cycles will result in failure.

While titanium might be the “ideal” metal for bicycle frames, it has never become popular due to its cost. Another complication with its use is that titanium is more challenging to weld. Without precise welding procedures, welds can easily become contaminated, resulting in catastrophic failures.

Even some of the more exotic frame alloys, such as aluminum lithium, require a critical heat-treatment process. If the alloy is heated for too long or at too high a temperature, the lithium can oxidize, leaving a much-too-soft pure aluminum. Our discussion has been limited to metal, but carbon composites have also gained in popularity for high-end bikes. 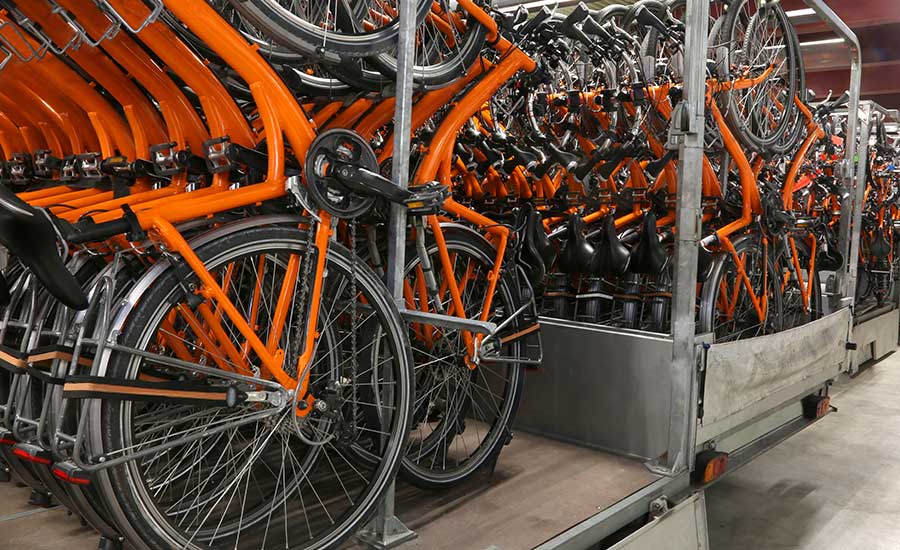 If you enjoyed this article, check out Everyday Metallurgy in Industrial Heating's bookstore.