In Part I of this article, which appeared in the June issue, we covered the most recent develoments in lubrication systems as related to hot-forging processes. In this second and final article of the series, the latest developments in lubricants for cold-forging applications are covered.

Lubrication is usually not achieved through die lubrication in cold-forging applications. Instead, it relies on phosphating and soap treatment of the workpiece to support metal flow, prevent galling and reduce tooling wear of the tools. However, traditional phosphate processes are complicated, have a large footprint and create significant waste streams. Newly developed polymer coatings have shown to be able to replace this complex process, significantly reducing the waste stream and improving lubrication performance.

Cold forming has a long history of using the phosphating process to support metal flow, prevent surface defects and improve die life. The earliest patents using phosphating to support metal forming date back as far as 1930[7] and have since been established as a widely adopted process in industry.

During the phosphating step, a (chemical) conversion layer of zinc phosphate (hopeite) or a mixed film of zinc phosphate and zinc iron phosphate is formed on the surface of the steel. This layer is extremely adherent and provides the basis for anti-galling while supporting lubrication and providing protection against corrosion. In a subsequent step, this phosphate layer is normally treated with reactive soaps to create a layer of, for example, zinc stearate, providing the necessary lubricity.

The process to prepare such a phosphate/soap layer is complex and can take as many as 10 treatment steps using corrosive chemistries (Fig. 1). Aside from the corrosive chemicals involved, the process is burdened by high maintenance costs, high energy consumption and chemical-waste (sludge) issues. To address these disadvantages, new concepts in the form of polymer coatings have been introduced. 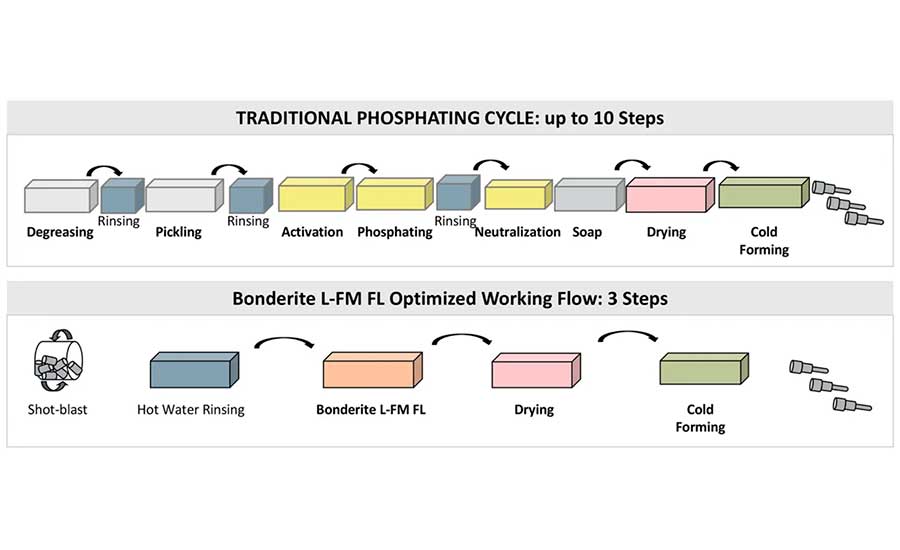 To address the disadvantages associated with the phosphating process, polymer coatings have been introduced under the brand Bonderite L-FM FL, which is based on technology licensed from Nihon Parkerizing Co. Ltd.[8] These polymer coatings no longer rely on chemical deposition of a phosphate layer but rather on physical deposition of a lubricating film (Fig. 2). The products are water-based mixtures of inorganic components combined with polymers. Upon drying, the inorganic components associate themselves with the metallic surface, forming a strongly adherent film with excellent anti-wear and extreme pressure properties that prevent galling during metal-forming operations. At the same time, the polymers migrate to the surface of the applied film and promote metal flow by reducing the friction.

Schematic of forming a polymer coating

The new process relies on a clean surface free of oxide scale and contaminants. This is achieved through shot blasting followed by a hot water rinse. The created surface offers the basis for good adhesion of the product, which is applied by a dipping or flooding process at a temperature of 50°C followed by a drying step as depicted in Figure 3. 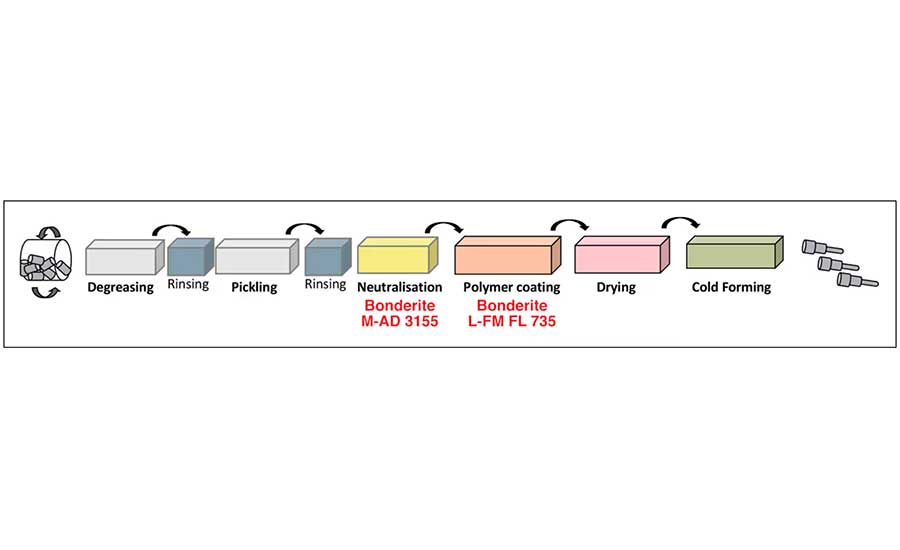 Schematic of a polymer coating process

Surface preparation by acid pickling is possible as an alternative to shot blasting. These concepts were developed and evaluated under laboratory conditions, conducting the spike test after the method reported by Isogawa et. al.[9]

The performance of the latest developments in polymer coatings are depicted in figure 4, showing the latest generation, Bonderite L-FM FL 744. The performance exceeds that of traditional phosphate soap application. These new products have proven themselves in applications including wire and tube drawing, screw and bolt production, CV-joint calibration and production of drive shafts. 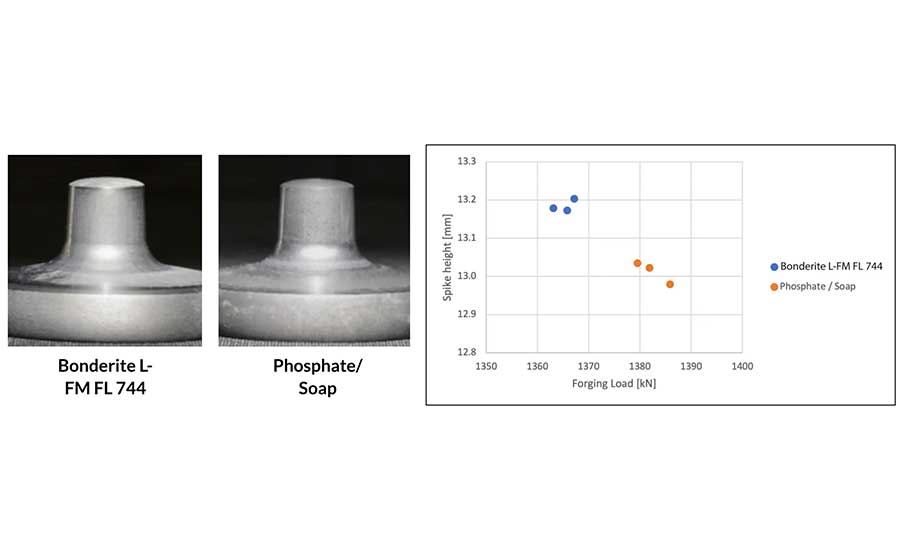 Next to the simplified process, the typical benefits found are an increase in tool life and low maintenance time and costs. On top of that comes the elimination of the typical waste streams – like phosphate sludge, reactive soaps and wastewater treatment – that are associated with the phosphating processes.

Lubrication systems for cold, warm and hot forging have been evolving continuously toward higher lubrication performance, ease of use and better sustainability.

There is clear demand in hot and warm forging of steel to replace graphite-based die lubricants with synthetic lubricants to improve the work environment and reduce galvanic corrosion. The performance of current graphite-free lubricants is, however, not at the same level, and the tribological behavior is much more complex and less predictable than that of graphite. As such, new concepts are being developed to overcome this lack of performance. The presented work, although promising from a conceptual point, is still far away from actual implementation and needs further research.

The significant steps made in cold forming by replacing complex phosphating systems, however, show what can be achieved by continuous research and development of new lubrication concepts. The continued development of polymer coatings has resulted in products, such as Bonderite L-FM FL 744, that can replace a traditional phosphating system, resulting in simplified processes, reduced energy costs and waste and improved forming performance.

G.J. Odink is Head of Product Development Functional Coatings and Lubricants for Henkel AG&Co. KGaA (Germany) – Adhesive Technologies – Automotive and Metal Industry. Questions may be directed to Thomas Scharpe, Henkel’s Manager of Business Development NA Automotive Components, ST/C&L. He can be reached at thomas.scharpe@henkel.com. All graphics supplied by the author, except where noted.