Cold forging is a proven and efficient serial production method for bolt manufacturing. Despite the many advantages of cold forging, the method requires high forging forces due to the low material formability. This leads to the generation of high contact pressures between workpieces and dies. This operational challenge may lead to serious problems in the effectiveness of the final product.

From a Small Issue to a Huge Problem

Although significant failure modes in fasteners are generally related to secondary operations like heat treatment or coating, some problems may arise from improper forging. These can be lap or shear-band formation, which causes sudden cracking in the fastener during assembly. There is another type of failure that can occur during the forging operation: burr formation. This type of failure is rare and mainly related to differences in dimensional tolerances in die segments or die components. These spaces may be filled with flowing material during forging, which leads to the formation of burrs on the semi-finished product and possibly sudden die failures. 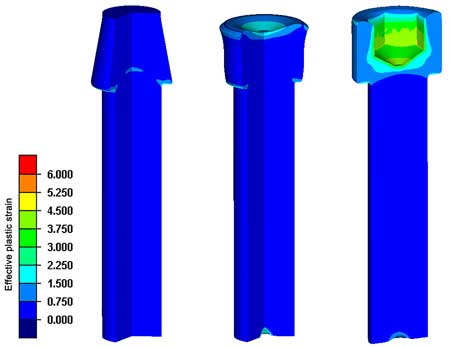 Figure 1. A digital graphic representation of forging steps of a bolt having internal (Allen) sockets.

Bolts are tightened either externally (hex-headed bolts) or internally (Allen bolts). In the second case, Allen bolts have internal sockets for tightening. Internal sockets are formed during the heading operation by pushing a punch in the shape of a socket through the forged semi-product (Figure 1).

In serial-production conditions, flaws in socket formation may take different forms, such as cone-shape formation, socket bulging and burr formation. These failures can, in turn, lead to serious assembly problems in use, such as the fracture of the tightening apparatus and even complete failure of the tightening operation. An example of burr formation in Allen heads in M20, DIN 912 bolts can be seen in Figures 2a and 2b. As seen in the figures, a layer of the head surfaces can rupture, and burrs occurred in the hex-form socket. This leads to serious tightening problems at end-user operations. 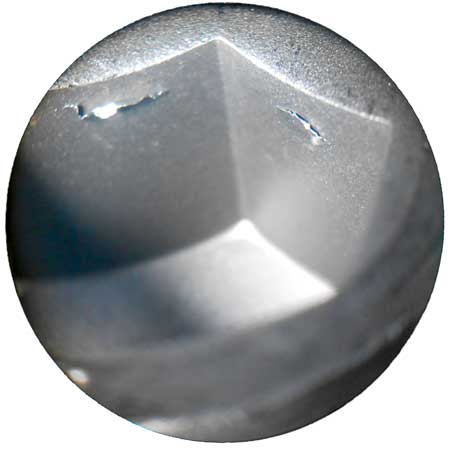 Understanding the core of a problem relies on a complete failure evaluation. In today’s digital environment, the first thing to do is conduct numerical modeling. Here, forging models were prepared in the Simufact Forming software platform to analyze the basics of the process.

In numerical modeling of metal-forming operations, it is crucial to use proper finite-element analysis (FEA) model parameters like material model, friction model, mesh distribution and element type. Understanding the mechanics of the operation is important in using proper models in simulations. As stated in reference 1, contact pressure plays a significant role in metal forming regarding conditions of friction. Under high contact pressures, friction between a tool and the workpiece vanishes and material sticking occurs. Material sticking is also triggered by increasing temperature during forming operations. 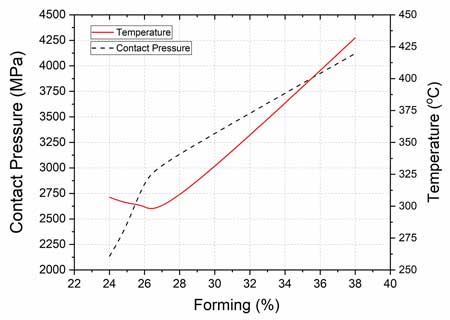 Figure 3. Variation of contact pressure and forming temperature during forging.

Figure 3 helps us understand this. It is a graph of contact pressure plotted against temperature variation during forging. Contact pressure between the punch and workpiece material increases rapidly early in the forming process and linearly reaches its maximum value around 4,100 MPa. Similarly, temperature is also seen to increase during the forging operation up to 440°C, which is high for cold operations. 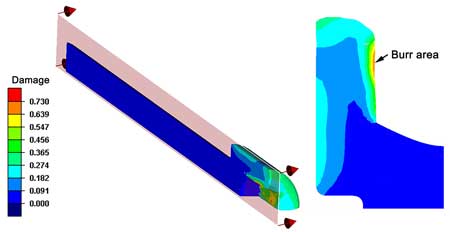 Figure 4. Distribution of damage in socket area through modeling views and photo. 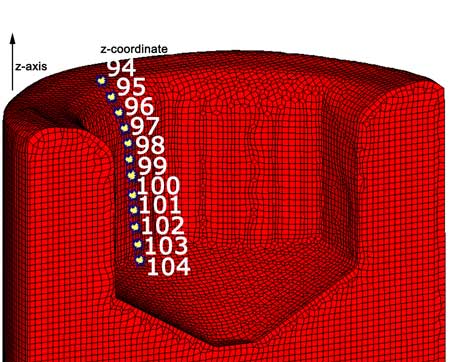 Damage distribution (calculated using the Cockroft-Latham model, which is based on first principle stress and effective plastic strain) on the product after forging is shown in Figures 4a and 4b with the comparison of burrs formed in the socket. Our simulation predicted the exact location of the burr formation. However, it is still not clear that this damage value can generate a failure in the socket. To gain deeper insight, data were collected along the z-coordinate of the bolt in the socket section (Figure 5). 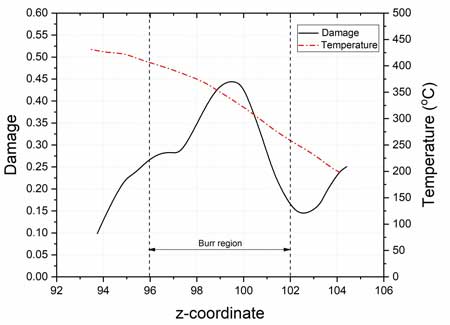 Figure 6. Variation of damage, stress triaxiality and temperature in the socket region

These findings imply that burr formation in the socket region is not completely related to the forging operation itself. Although damage and stress triaxiality values reach their maximum at the burr area, they are not so high as to form a surface tear or fracture.

Accordingly, a different mechanism may be the cause of this problem: wear. In cold-forging operations, punches are mainly coated with TiN, TiAlN or AlCrN to slow tool wear, eliminate material sticking and dissipate forming heat away from the tool surface. The thickness of coatings varies between 3 and 5 µm,[3] and coating thickness decreases during the forming operation on each forging pass. Therefore, the condition of the coating on the tool and punches is of critical importance.

Figure 7 shows the surface of the punches after 2,000, 8,000 and 10,000 forging cycles. As depicted in Fig. 7a, the forming surface of the punch is not deformed after 2,000 forging passes. The surface looks golden in color, and it is not textured. However, the forming surface of the punch experienced surface pitting (Fig. 7b). This may lead to accumulation of the workpiece material in these micro-channels during forming, which eventually leads to surface tearing and burrs. Moreover, the coating of the surface totally vanished with the increasing number of forging cycles (Fig. 7c). This leads to material sticking on the tool surface, and it may lead to surface tearing on the socket (Fig. 2b).

A complete failure analysis was conducted to determine the core reason for burr formation in hex-bolt sockets. The numerical study clearly showed that mechanical variables are related to our understanding of the forming mechanism during the heading operation to form the socket section. Although solid data taken from the numerical model may yield some conclusions, these findings cannot fully explain the phenomenon.

Some traditional observations and analysis of the product and processes helped solve the problem. Burr formation in the Allen-bolt socket was found to be causally related to punch wear and surface segregation/pitting. This shows the importance of process control. In a fast operation like cold forging, instant control of dies and punches becomes crucial to eliminate future problems in forged material.

Briefly put, control of the forging forces and control of die surfaces are critical for proper production.

All graphics supplied by the author.

Cenk Kılıçaslan is with Norm Cıvata San. ve Tic. A. S. (Norm Fasteners Co.); Turkey.
You must login or register in order to post a comment.