Greenleaf Corporation of Saegertown, Pa., is a supplier of industrial cutting tools. The company specializes in the manufacture of high-performance carbide and ceramic inserts, tool-holding systems and custom-designed tooling solutions. Greenleaf capitalized on its line of carbide products by engineering innovations in the areas of ceramic, ceramic composites and custom-designed tool-holding systems. Greenleaf’s introduction of WG-300, a whisker-reinforced ceramic insert, is recognized as one of the most significant advancements in the history of cutting tools. It has enabled companies to reach previously unachievable machining speeds.

Ohio Crankshaft Co. of Cleveland, Ohio, produces large crankshafts, camshafts and other customized critical components for diesel engines, pumps and other reciprocating equipment. In 1934, the company developed a proprietary process using high-frequency electrical current that could selectively heat, harden or melt metals. Named the TOCCO process, it was a technology with which steel parts could be heated and hardened within seconds and produce parts with wear resistance superior to other technologies at the time. The Packard automobile was the first car to use an induction-hardened crankshaft, and other automobile manufacturers would soon follow suit.

Throughout the last several decades, Ohio Crankshaft’s crankshafts and camshafts have been used in tugboats, oil drilling equipment, locomotives, buses, pumps, compressors, trucks, heavy-duty construction equipment and high-velocity water-pressure cleaning equipment. The company continues to produce new locomotive crankshafts and camshafts and refurbishes the cranks and cams that were produced in the 1960s, 1970s and 1980s – a tribute to their lasting quality and workmanship.

In its manufacture and machining of steel forgings into locomotive and tugboat crankshafts, it was taking Ohio Crankshaft four to six hours with one shaft machined per two indexes of carbide inserts. The company felt this was too slow and checked into some advanced machining solutions.

“We really felt there must be a more efficient way to do this,” said Greg Stem, Ohio Crankshaft’s director of engineering. “We’ve worked with Greenleaf for a long time, so we talked with them about potential solutions for this application.”

Greenleaf’s corporate headquarters in Pennsylvania and a facility in North Carolina are the mainstays of pioneering breakthroughs in cutting-tool technology and manufacturing.

“Special tooling is one of our greatest areas of expertise, so we started working closely with the engineers at Ohio Crankshaft,” said Denny Carpenter, sales and service engineer for Greenleaf. 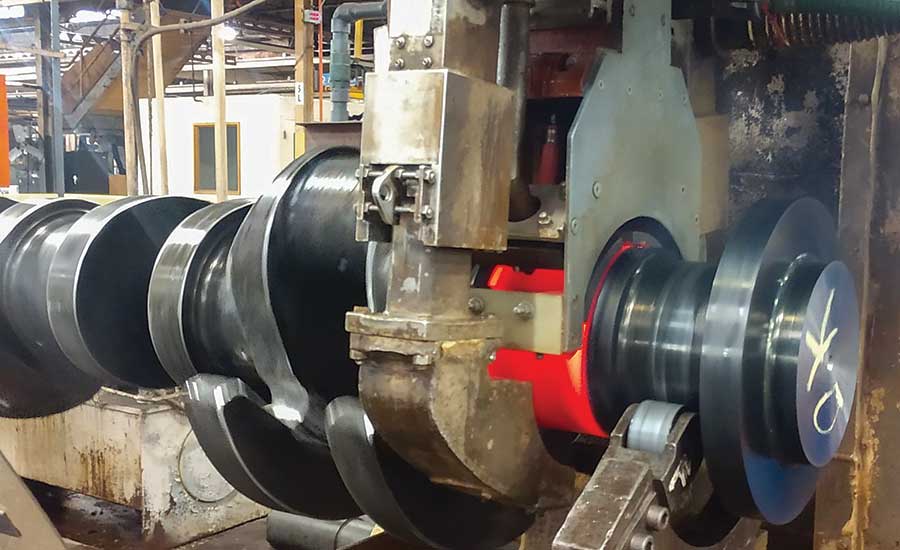 Ohio Crankshaft’s history began in May 1920 in a small garage in Cleveland run by two engineers, William C. Dunn and Francis S. Denneen, with a futuristic vision. By 1922, the company was growing so rapidly it moved to a larger facility located only a few miles away from its current location.

The current home of Ohio Crankshaft was built in 1938, and a second plant was built almost directly across the street in 1940. Both plants were wartime factories that produced crankshafts for military trucks, tanks and war planes.

Ohio Crankshaft built its proprietary TOCCO machines that were sold throughout the U.S. and Europe. By 1951, the demand for TOCCO machinery was so great that a new plant dedicated solely to their manufacture was built just a few miles away from their current plant. In 2001, the plant on Harvard Avenue was named a historical landmark by ASM International as “the site of the first production application of selective induction hardening of steel parts.”

In 1967, the Ohio Crankshaft Company merged with Park Drop Forge, founded in 1907, to become Park-Ohio Industries. With its world headquarters in Cleveland, Park-Ohio has grown substantially through acquisition and diversification. Today, Park-Ohio is a global, diversified holding company with over 130 manufacturing, distribution and service facilities that employ over 7,000 with locations in 20 countries.

The current cutter bodies were altered to encapsulate a segmented design, which allowed for more insert pockets. This meant that 25% more inserts could be applied to the parts, resulting in faster feed rates. Greenleaf’s GA5036 CVD-coated carbide insert grade was designed for the high-speed milling of forged and cast steels and selected ductile irons. It is particularly suited for this application because it has the perfect cobalt level to make the substrate tough enough to handle the extreme conditions. The multilayer coating protects it from the heat generated at higher speeds.

The heat resistance of Greenleaf’s GA5036 made it the best choice for high-speed milling of the forged steel. Ohio Crankshaft’s machine was also mechanically upgraded to allow for higher cutting speeds.

With the application of the appropriate cutting-tool material, the crankshaft milling cycle time was reduced to under two hours with four shafts machined per index of the carbide inserts. Greenleaf and Ohio Crankshaft managed these productivity gains to the benefit of both companies and proved that combining efforts can give exponential results.

Two regionally neighboring companies, each celebrating milestone anniversaries in 2020, collaborated to improve the efficiency of machining large steel crankshafts. The partnership that developed between a forge in Ohio and a cutting-tool company in Pennsylvania resulted in a significant reduction in milling time for large steel locomotive and tugboat crankshafts.