This article covers the vexing problem of properly cooling forged microalloyed steels. This first of two parts will discuss the technical and business benefits of forged microalloyed steels. The process of forging these steels is traced from billet to trimmed part, zeroing in on the challenge facing forgers: controlled cooling. This article will cover material modeling, critical cooling rates and chemistries. Part II will appear in the February 2020 issue with details on heat-transfer coefficients, experimentation, production simulation and final results enabling more extensive use of this class of steels.

Microalloyed steels are plain-carbon or low-alloy steels with small additions (hence the name microalloyed) of additional elements, primarily vanadium. This class of steels was developed in the 1960s for steel plate and pipeline applications, with niobium playing a major role despite its “bit part.” In the 1980s, forgers began to hammer and press significant quantities of microalloyed steel components for demanding applications requiring assured, higher properties.

Microalloyed steels have higher strength and higher toughness as compared to low-alloy steels with the same microstructure, which is most often ferrite-pearlite. Although microalloyed steels do not have the high strength-toughness combination of quenched-and-tempered alloy steels, they possess enough strength and toughness for many applications. Their real advantage is in the savings obtained during subsequent heat treatments. In fact, heat treating is eliminated for microalloyed steels, saving time and money and offsetting any incremental costs incurred by the addition of the microalloying elements (e.g., niobium or, for our discussion, vanadium).

Forgings of microalloyed steel perform well in automotive applications, including crankshafts, connecting rods and drivetrain components. They are also used in hand tools. The majority of microalloyed steel forgings are readily produced in high volumes with moderate weights (0.5-5 kg), which reflects the tremendous customer pull toward these steels by the automotive industry. 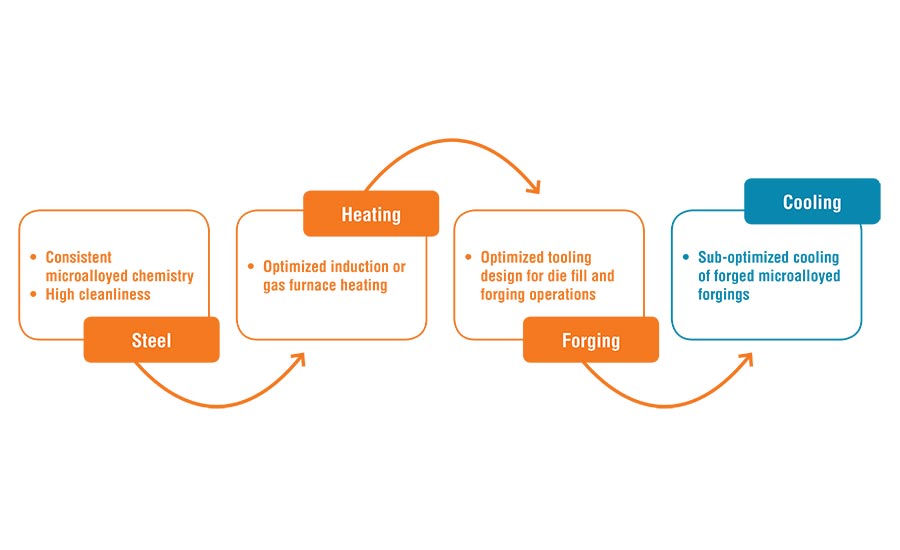 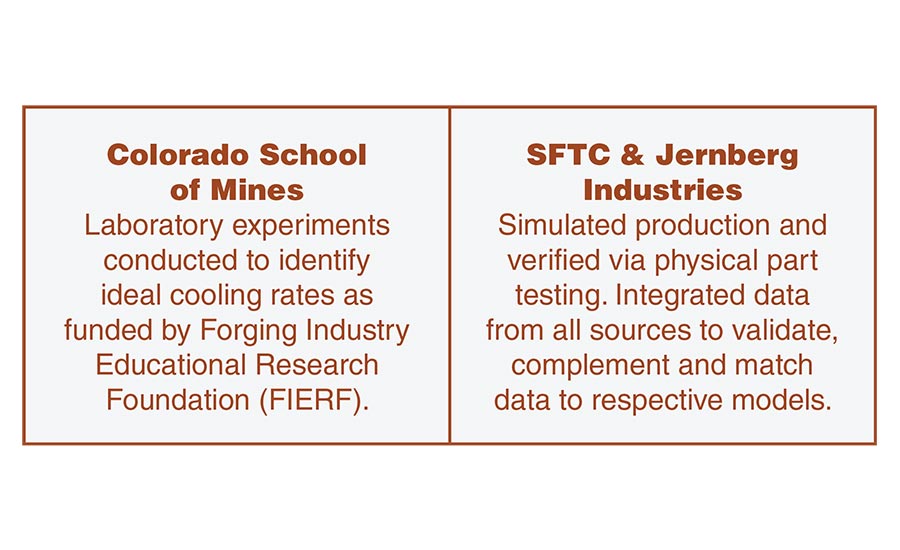 Recognizing the pervasive need to control cooling of microalloyed forgings, at least two groups were researching this topic. In a grant made by the Forging Industry Educational Research Foundation (FIERF) in 2012, the Colorado School of Mines (CSM) proposed laboratory experiments to identify ideal cooling rates for microalloyed steels. Upon reviewing the proposal, representatives from Jernberg Industries and SFTC discussed how the same data could enhance current industrial practice. Further, the same data could enhance simulations to reduce future process development cycles. The companies collaborated in fully integrating this content for improved and accurate modeling (Fig. 2).

Mechanistic modeling is appropriate when a process is well understood and can be quantified with equations. A simple example is that of an object falling through air from a known height near the surface of the earth. If aerodynamic drag is neglected, then falling speed is a function of height with certainty and accuracy. Similarly, in forging, heat transfer is directly simulated with exceptional accuracy assuming the models incorporate valid physical data.

When simulating complex processes, exact equations are often not available. In such cases, the analyst frequently resorts to empirical modeling. This technique reverse engineers a behavior from known processes. A good example in the forging industry is the Archard model, which is an exceptionally good predictor of wear. While imperfect, empirical models are excellent engineering tools. Empirical models generally require some fine-tuning to match a range of processes.

Probabilistic modeling is used when significant defects occur in a process with low frequency. For example, certain modeling techniques predict the occasional fracture or large grains that can lead to in-service failure of a forged component. 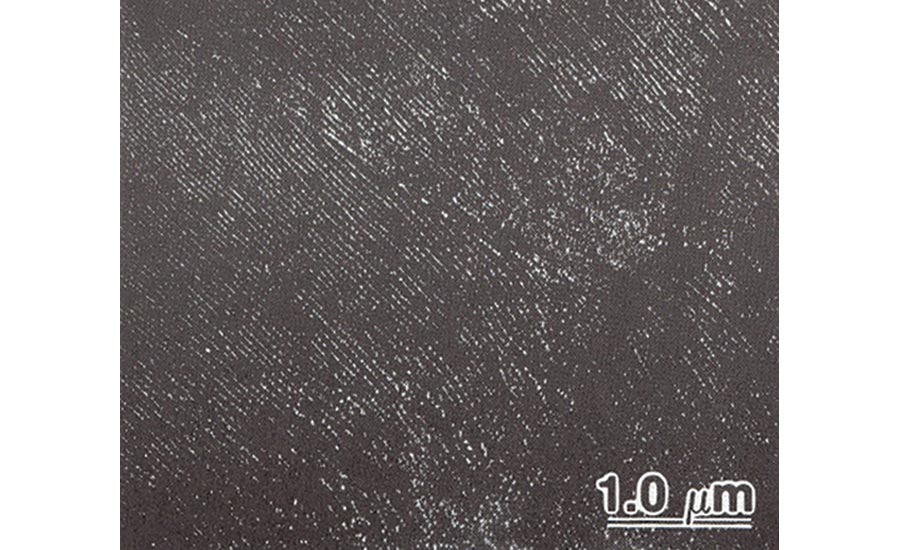 For microalloyed steels, the cooling rate is critical to produce interphase precipitation and maximize the strength and corresponding hardness. Since the precipitate formation is desired to occur simultaneously with the austenite decomposition, there is also a critical temperature region over which the cooling rate needs to be maintained. 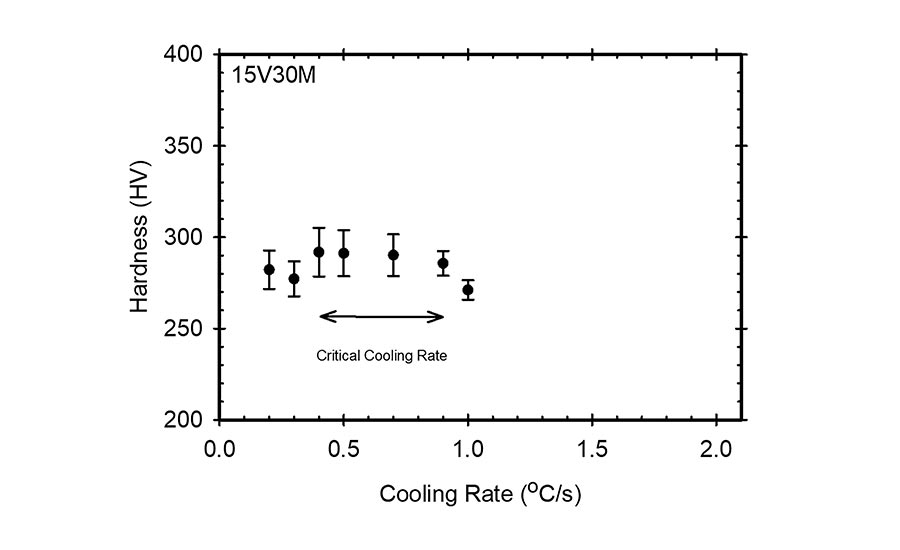 For a reasonable-size forging, it has been found that cooling rates within a bin after forging varies from 0.06-0.2°C/second, depending on the location – bottom, middle or top. These cooling rates are often too slow for interphase precipitate formation in vanadium microalloyed steels. A faster rate, often accomplished by air fans and a conveyor belt or accelerated with a water-mist spray, is required to ensure optimal microstructure with attendant properties.

The major challenge in developing the post-forging cooling process is to design and implement the best cooling rate to achieve maximum properties for a given microalloyed forging steel. Harkening back to Metallurgy 101: process determines microstructure determines properties!

To determine the critical cooling rate, three vanadium microalloyed forging steels were investigated in the laboratories of CSM as part of a FIERF-sponsored project. Table I lists the nominal composition for these steels. 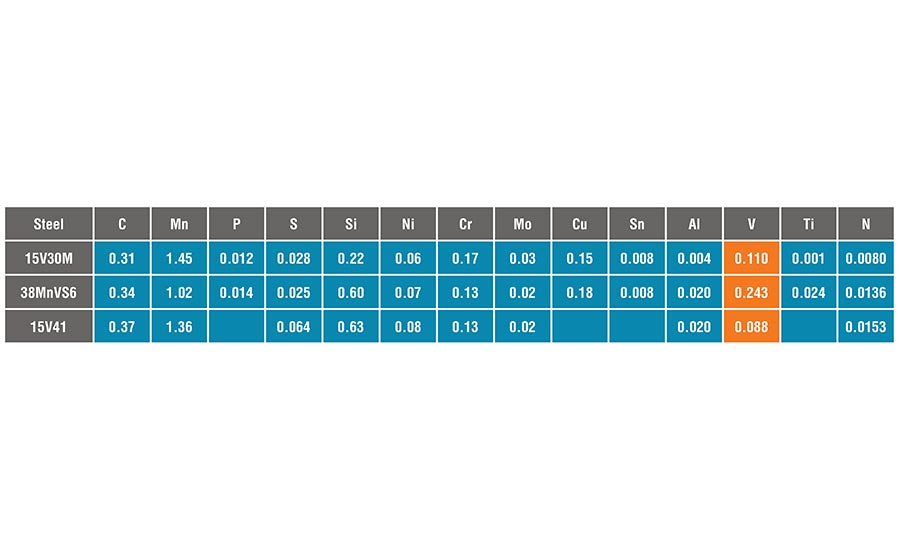 Samples were machined from the mid-radius of the steel bars. Each sample was heat treated in a Gleeble 3500. The samples were heated to 1200°C at the rate of 10°C/second, held for 60 seconds and then cooled at various rates. The transformation temperature range for formation of ferrite and pearlite was determined by dilatometric analysis of the Gleeble data. The microstructure and hardness were determined after the heat treatment and cooling.

The critical temperature range for all three steels, over the cooling rates tested, was found to be 700 to 500°C. Figure 4 shows the hardness versus cooling-rate data for the 15V30M steel alloy. Hardness peaks when the cooling rate is around 0.6°C/second (1.1°F/s). The range of cooling rates where the maximum hardness values is obtained is between 0.4-0.9°C/second (0.7 to 1.6°F/s).

Similar hardness versus cooling-rate data were obtained for the 38MnVS6 and 15V41 steels. Table 2 shows the cooling rates where peak hardness is achieved for each of the steels. It should be noted that the critical temperature where these cooling rates must be maintained is 700 to 500°C. 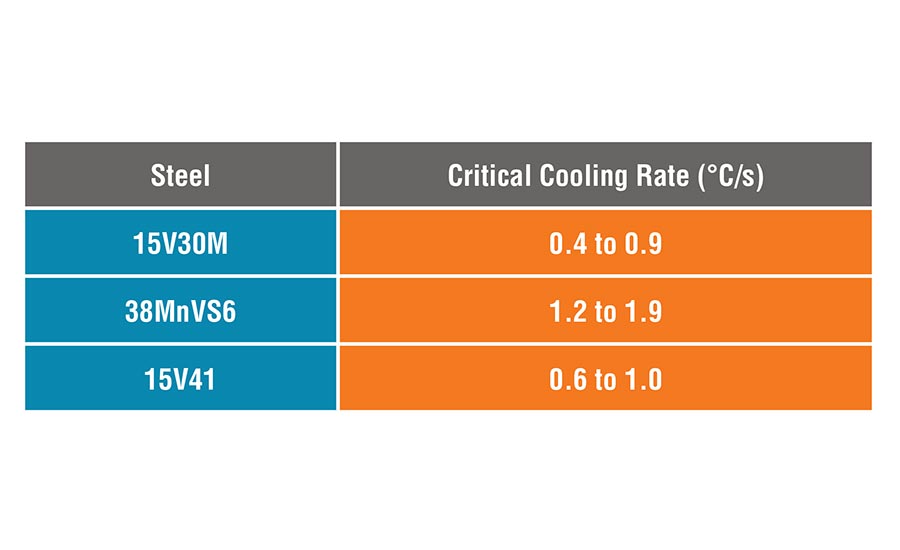 The authors thank Jernberg Industries for their contributions in the experiments, production testing and project reporting involved in these efforts. Markus Knoerr, Jernberg’s VP of Engineering at the time, is credited with the original FIERF project concept. The team also thanks the FIERF for supporting CSM’s efforts and supporting technology transfer across the industry as it delivers affordable, high-quality parts for demanding applications.

Look for Part II of this article in the February 2020 edition of FORGE, where we will illustrate how the cooling-rate data generated at Colorado School of Mines was applied to improved cooling modeling. Using these and other data, the team developed a model to correlate hardness to cooling rate, which is an extremely powerful concept for the forger in process design, part property prediction and quality assurance.

Jim Miller is principal research scientist at Scientific Forming Technologies Corporation. He may be reached at 614-451-8330 or jmiller@deform.com.

John Walters, a frequent contributor to FORGE, is vice president of Scientific Forming Technologies Corporation, Columbus, Ohio. He may be reached at 614-451-8330 or jwalters@deform.com.

Chester J. Van Tyne is FIERF Professor, Department of Metallurgical Engineering, Colorado School of Mines, Golden, Colo. He may be reached at 303-273-3793 or cvantyne@mines.edu.