They came, they met, they conquered.

OK, maybe only 26 members of the Forging Industry Association came to Washington, D.C. April 17-18 to meet with members of Congress on trade, workforce development and infrastructure spending as part of the 15th Annual FIA Lobby Day. However, this was the largest Lobby Day in FIA history with 19 companies in attendance representing facilities in 11 states. The 26 executives participated in 42 congressional meetings, including meetings with the Speaker of the House, trade policy staff with the House Committee on Ways and Means and acquisition staff with the House Armed Services Committee.

During these Capitol Hill meetings, FIA’s position on the administration’s tariffs on steel and aluminum under Section 232 of trade law was dominant. As it has provided to the administration on numerous occasions during the last year, FIA stressed to Congress its concerns that the 232 tariffs are creating significant problems for downstream users, such as U.S.-based forgers. Increased prices on domestic steel and aluminum, longer lead times and the threat of increased imports of foreign-produced forgings could make U.S. forgers uncompetitive both domestically and in the global marketplace.

In addition, the product exclusion process that the Department of Commerce has established is burdensome and time-consuming, particularly for small and medium-sized manufacturers. FIA urged Congress to work with the administration to have the tariffs removed as soon as possible. If that cannot be done quickly, FIA further stressed that similar treatment must be applied to all imported forged products, not just the aluminum forgings currently included in the scope of the tariffs, and the product exclusion process must be revised.

As a bit of background for readers that may not have been closely following this issue, the President implemented a 25% tariff on most basic steel products (flat, rolled, bar, ingot, wire, etc.) and a 10% tariff on aluminum products, including “forgings and castings.” The tariffs are on top of any other tariffs or duties already in place, and there is no time limit. As of this writing, Australia, Argentina, Brazil, Canada, the European Union, Mexico and South Korea are exempted from the tariffs until May 1, 2018. Unless new agreements and deadlines are announced by May 1, the tariffs will immediately be in effect for these countries. The Department of Commerce is overseeing a process whereby individual companies can request product exclusions for covered products not available in the necessary quantity and quality in the U.S. They have received over 5,000 requests, but very few of those have been publicly posted or granted.

Another key topic for the FIA Lobby Day meetings was workforce development and the struggle in the forging industry to find qualified workers. FIA expressed its support for Congressional efforts to increase funding for Career Technical Education (CTE) programs in high schools and colleges. We also urged flexibility in allowing federal financial aid (e.g., Pell Grants) to be used for non-traditional degrees/programs (e.g., technical programs and two-year degrees). FIA Lobby Day attendees reminded legislators that it is vital that employers be consulted in tailoring apprenticeships and training programs funded by state and federal dollars.

Finally, given this administration’s interest in an infrastructure spending package of some kind, FIA expressed support for a comprehensive infrastructure funding program that would create jobs at every level of the economy, from manufacturing to construction. Not only do forgers need to move parts to customers’ locations like other manufacturers, but the heavy equipment used in the construction of infrastructure projects contains forgings, as do the ships, railcars and trucks that move the nation’s goods. 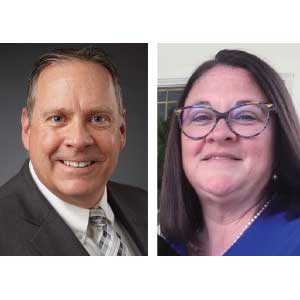 Please refer any questions or comments to James Warren, FIA president and CEO (left). He can be reached directly at 216-781-6260 or jwarren@forging.org. Jennifer Baker Reid (right) is FIA’s Washington Representative. For additional information, visit www.forging.org.