LEGAL EASE ... Forging and the Law

Gun Rights in the Workplace (Part 2)

This issue’s column is a continuation from April’s column, in which I presented six points for consideration in your operation’s gun-possession policies. This month’s column will consider four additional points. In order to prevent confusion, I have kept the same numbering order from the previous column.

Please allow these two columns to serve as a starting point for your workplace firearm-possession discussions. However, keep in mind that you will need to consult your business attorney for specific state laws and regulations regarding firearm policies within and around your forge operation.

As a review, federal law does not regulate gun possession for most workplace issues – state law generally provides these regulations. As such, please bear in mind that this column cannot possibly review all the regulations for each state in which FORGE is read. Furthermore, I think it is safe to assume that several states will be amending their laws regarding firearms. Be aware that your state laws may be changing, perhaps at a more frequent pace as this issue remains politically active. 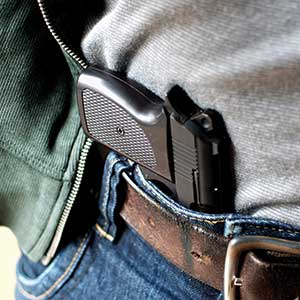 Let’s continue from my April column’s talking points. Seventh, many states’ laws provide employees with a civil action for monetary damages, injunctions, costs and attorneys’ fees against employers who violate workplace gun laws. Violation of these statutes can also constitute wrongful discharge in violation of public policy. As an example, a case in one state holds that termination of an employee for possessing a gun in a glove compartment of a vehicle in the employer’s parking lot did not support a claim for wrongful termination in violation of public policy. A court ruling in another state indicates that the state does not have a “clear public policy” of allowing employees to possess firearms on the premises of their private employers.

Eighth, some state laws provide immunity for employers for crimes committed by employees who possess firearms in compliance with workplace gun laws. The law of one state provides immunity “unless such employer commits a criminal act involving the use of a firearm or unless the employer knew that the person using such firearm would commit such criminal act on the employer’s premises.” The law of another state provides that an employer is not required to investigate whether an employee’s possession of a firearm is contrary to state or federal law.

Ninth, state laws do not trump other laws that prohibit possession of firearms, such as laws that prohibit felons from possessing firearms. Additionally, many workplace gun laws provide exceptions for situations impacting public safety such as possession of a firearm on school property, at correctional facilities, on property owned or leased by an oil or gas refiner or chemical manufacturer, or on other property where state or federal law prohibits firearms.

Tenth, several employers’ challenge of parking-lot laws and similar gun-control laws have not gained much traction. One such case regarding employee gun possession arose from an employer challenging what it thought was an unconstitutionally vague law, resulting in an unconstitutional taking of private property, a violation of the due process right to exclude others from property and preemption by federal statutes, including OSHA. A lower court agreed with the employer, but an appeals court reversed the lower court’s ruling, pointing out that “OSHA declined a request to promulgate a standard banning firearms from the workplace. In declining this request, OSHA stressed reliance on its voluntary guidelines and deference ‘to other federal, state and local law-enforcement agencies to regulate workplace homicides.’” To date, OSHA has not adopted such a regulation.

While policies restricting an employee’s ability to possess a firearm at the place of employment or during work time can help protect other employees and the employer from liability, employers should be careful not to run afoul of state laws protecting employees’ rights to possess firearms. Currently, prohibiting employees from carrying a firearm on his or her person while working or from having guns in the employer’s office is permissible in every state. However, prohibiting employees from having firearms in their personal vehicles (even in a company parking lot) and discriminating against gun owners in hiring or the terms and conditions of employment can result in liability in many states.

As noted in April’s issue, forging operations considering such policies should carefully review and seek advice from competent legal counsel in each and every state where the forge plans to limit employees’ ability to possess guns.