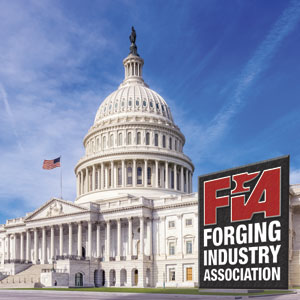 Another successful FIA Lobby Day took place in Washington, D.C., April 22 and 23 when forgers and suppliers met with members of Congress about key issues affecting the forging industry. When the dust settled, FIA members had visited 17 House and 12 Senate offices and the staffs of two House Committees and one Senate Committee. The group also heard from freshman Republican Congressman Mike Bishop (R-MI) at their annual dinner.

The focus of Lobby Day was comprehensive tax reform, the EPA’s Clean Power Plan, energy policy, regulatory overreach and the reauthorization of the Export-Import Bank.

On tax reform, FIA supports the goals of lowering the top tax rate for all taxpayers to no more than 25%, broadening the tax base to maintain current revenues and moving toward a territorial system for taxpayers with global operations. FIA made clear that this support is contingent on all manufacturing being treated alike, regardless of corporate structure, since many forging companies are small- or medium-sized businesses, often closely held or family-owned, in which taxes are paid at owners’ individual rates.]

Lobby Day participants also told members that repeal of the “Last in, First Out” (LIFO) form of accounting, should NOT be part of tax reform, cautioning that a requirement that LIFO reserves be repaid could bankrupt some small companies.

The EPA’s Clean Power Plan came under heavy fire as well. Participants told Congress forging plays a unique role in the energy sector since forgings are required for all forms of energy exploration, development and delivery. And yet the industry is energy-intensive, requiring adequate supplies of affordable energy (largely natural gas) to produce those parts.

Under the EPA’s proposal, energy costs would rise dramatically due to the anticipated removal of coal-fired energy producers, which would also lead to increased prices of metals such as steel, aluminum and titanium used in forging processes. Consequently, FIA has endorsed HR 2042, the Ratepayer Protection Act, introduced by Rep. Ed Whitfield (R-KY). The bill would delay any implementation of the EPA’s proposal until after all judiciary reviews are completed and give states additional power to refuse to implement the plan.

On energy policy, FIA members told Congress that their continued global competitiveness depends on access to adequate, affordable supplies of natural gas and electricity. They urged members to support increased drilling for domestic oil and gas because fossil fuels will be the primary energy source for decades. They also urged approval of the Keystone XL pipeline and the continued development of safe, reasonable, cost-effective regulation of hydraulic fracturing.

The federal government’s heavy regulatory hand was also targeted. In addition to the EPA’s Clean Power Plan, forgers drew attention to proposals by the Department of Labor and the National Labor Relations Board that are impeding or threatening the global competitiveness of U.S. manufacturers. FIA has endorsed legislation, known as the Regulations from the Executive in Need of Scrutiny (REINS) Act, that would require Congressional approval for any proposed regulation with more than a $100 million impact on the economy.

Finally, FIA members urged Congress to approve a long-term (five years or more) reauthorization of the Export-Import Bank, which provides financing and loan guarantees for many U.S. exporters. The Ex-Im Bank is the only agency that returns money to the U.S. Treasury, and its charter is scheduled to expire June 30 unless it is reauthorized. FIA supports H.R. 597 and S. 819, which provide for reform and reauthorization of the Bank for five years.

Lobby Day has come and gone, and participants left Washington knowing that they helped educate members of Congress on key issues. As important as their participation in Lobby Day was, however, it is only one part of a systematic daily effort by FIA working to help implement public policies that enhance the global competitiveness of U.S. forgers.  Maybe you should think about getting involved—FIA could use your support.

Laurin M. Baker is Founder and President of The Laurin Baker Group, LLC., in Washington, D.C., and is part of FIA Washington Representatives. He can be contacted by phone at 202-393-8525 or email at lbaker@thelaurinbakergroup.com.